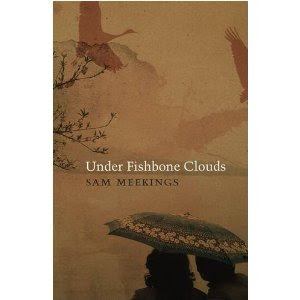 Sam Meekings novel Under Fishbone Clouds is a tremendous, poetic read. The story is about the long marriage of Jinyi and Yuying, he from a poor peasant family, she an educated girl, daughter of a restaurent owner. Their marriage is arranged, in that Yuying isn't given a choice, it was decided by her parents. The point of view of the story is unusual, in that it is the Kitchen God who tells us the tale, through various reported conversations with The Jade Emperor and through a third person narrative.This is a bit confusing at first, but becomes easier to understand as the story progresses. Although apparently the story of a marriage and a family, the novel is also the story of modern China, from 1946 to the present day. The changes and upheavals that Chinese society goes through in that period is reflected in the events that happen to Jinyi and Yuying and their family.
Although I did find this somewhat depressing at times because of the awfulness of many of the events that occur, as well as the frequent mentions of dirt, lack of cleanliness, spitting and generally appalling poverty, the characters did grab my attention and I really felt I wanted to find out what happened to them, for good or ill. The writing is also extremely beautiful and the mention of many ancient Chinese myths and legends make this a very impressive debut of a novel.
Posted by jaycee at 12:59 No comments: 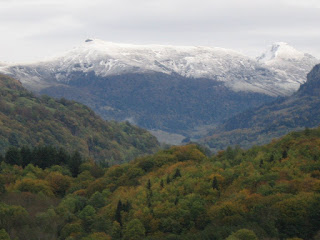 Well I'm at a loss to understand why students and schoolchildren are joining in the demonstrations against Nicholas Sarkozy's pension reforms in France. as they are the ones who will be paying for it, as we older baby-boomers have been paying the pensions of the previous generations in Britain, and all those people of our own age who managed to take early retirement in their fifties. Pensions don't jsut appear out of thin air, they have to be paid for somehow.
However, to change the subject, the last few days have been glorious autumn sunshine, which has melted the snow on the Puy Mary which appeared the other day, when we had rain, sleet and hail
We have spent some of the sunny days tidying up the small garden, in the probably vain hope that it won't be too overgrown when we come next spring and maybe need less weeding.
Posted by jaycee at 19:19 No comments:

Travelling to the Auvergne yesterday and the day before, from Le Havre was a somewhat anxious experience. The route we followed was one of the shortest we could find, across country and avoiding motorways completely. The reason was that with a tankful of petrol, we needed to be as economical as possible with our driving, as the possibility of filling up on the way diminished day by day before our trip. We did manage to find petrol in a small supermarket on our route, but we were limited to 23euros worth. . We stopped overnight at Aubusson for a comfortable overnight stay in Le France hotel. However at journey's end, we managed again to find that our nearest supermarket still had some petrol, limited to 20euros worth, but enough to keep the car topped up enough for some days to come. The French strikers seem to be calling off their efforts to change Sarkozy's mind, but may strike again on the 27th of this month.
Posted by jaycee at 20:10 No comments:

On a recent visit to my nearest branch library, I picked up a copy of Susan Hill's newest title, The Small Hand. I read this over a couple of days, even though it is fairly short. However, it is still a tour de force of a story. Adam Snow is a dealer in rare and antiquarian books and on a journey from visiting a client, manages to get lost and finds himself in heading down a country lane, only to end up in the overgrown remains of a once beautiful garden and house. The small hand which creeps into his brings with it terror and tragedy, both slowly and subtly revealed. I enjoyed this very much, as the quality of the writing is excellent and the build up of tension and terror is quietly menacing. A satisfying read.
On a totally different level, Elizabeth Chadwick's historical novels are also for me satisfying reads. They give a picture of a historical period outside that of historical academic writing, but are well researched, but readable. The plots and characters are believable, the language she chooses to use flows easily. Maybe the real historical characters she is depicting didn't speak exactly as she describes, but what is written is believable and reads well. The most recent of her novels I have read is titled The Time of Singing, and describes the lives of Ida de Tosney and Roger Bigod , both actual historical characters. Ida has been mistress to King Henry 2nd from the age of fifteen, but after bearing him a son and meeting Roger, decides to ask the king if she can be married. Henry agrees and Ida and Roger are wedded, but Henry keeps Ida's son William at court. The situation is further complicated by the fact that Roger's father had been in revolt against the king, while Roger, heir to the earldom, had sided with the king. The turbulent lives of the period, the alliances by marriage, the intrigues between King Henry, his wife Eleanor of Aquitaine and their sons, Henry the Young King, Richard and John are all well described. History in a easy to digest form, fun and easy to read.
Although entirely about another war and its aftermath, Talking about Jane Austen in Baghdad by Bee Rowlatt and May Witwit is a very different read. It is basically an exchange of emails between two women from different cultures. and very different outlooks and expectations. Bee is a Londoner, married with two daughters and a third child on the way, May is older, a lecturer in English and Human Rights and democracy at a University in Baghdad, divorced from her first husband and childless. Bee works for the BBC World Service and is introduced to May through an interview. They begin a correspondence by email and friendship grows as aspects of both their lives are revealed, Bee's that of a working mother, May's that of an a fairly ordinary Iraqi,living in what was a nice part of Baghdad, coping with the aftermath of the war and the downfall of Saddam Hussein. Her comments about life under Saddam Hussein being at least more ordered than the chaos of the present may not be quite what we westerners expect. The conflict between Sunni and Shi'ite sects also affect May and her husband Ali, adding the very real fear of death to their already fearful lives. An excellent read for anyone wanting to find out how Iraqis coped after the invasion.
Posted by jaycee at 18:56 No comments:

Labels: Small hand, Talking about Jane Austen in Baghdad, The Time of Singing

Andrew Marr's recent comments, made at the Cheltenham Literary festival , about bloggers and their characteristics was a piece of such sweeping generalisation that one can't help wonder what influence he was under when he made it. But then I don't generally read political bloggers nor the comments people make on blogs - life's too short. Most of the blogs I read seem to be written by women of a certain age, who also have a life outside of the virtual, i.e. in the real world, and are mostly literary blogs. I read blogs to follow my interests, not to read the rants of the ill-informed.
Posted by jaycee at 22:30 No comments:

Phyllida Law's book of Notes to My Mother-in-law is a very light read, funny and sad in parts as well. It's a one-sided conversation with an elderly woman who we sort-of get to know a bit about, but not the whole picture; a bit like hearing a part-conversation on a bus, or overhearing a phone conversation. It manages however to give a picture of life in the Law household; funny and endearing it seems to have been at that time.

Our Book Club recently read and discussed J G Farrell's Troubles, a story of the start of Ireland's fight for independance. The first part slowly sets the scene. Brendan Archer, a Major recently and barely recovered from shell shock acquired in the trenches of the First World War, arrives at the Majestic Hotel to visit his fiancee Angela, daughter of the owner of the hotel, an Anglo=Irishman called Edward Spencer. Gradually the Major settles into the hotel, which despite its name is far from Majestic in reality. The loss and decay gradually build up to a final conflagration. There are several very fuuny episodes and anecdotes before the devastating ending, so despite the theme of loss, this is not an entirely tragic story. We all enjoyed the novel and our discussion certainly concentrated on the more humourous elements of the story.

Another book I'm finding very engrossing at the moment is Stitching for Victory, by Suzanne Griffiths. Although a scholarly work, part of the authors degree in Textiles, this is a tale of how big a part stich played in the Second World War. From barrage balloons, blackout curtains, and blankets via clothing coupons, to parachutes, sandbags and uniforms, everything that involved the use of textiles in any way is described in this book. Not a book to read through at a sitting, it is fascinating to dip into chapter by chapter and find out how our antecedents coped with life in the Blitz sewing in air-raid shelters or as members of teams repairing barrage balloons, or making fabric coverings for aeroplanes and gliders.
Posted by jaycee at 15:46 No comments: