The second novel seems to be regarded with trepidation by many authors, or so we are told, and also with a certain amount of curiosity by readers - will it be as good as the first one. The three I've read recently are all as accomplished as the debut novels I enjoyed when they first appeared. 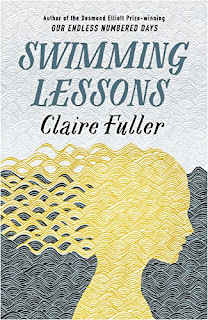 Claire Fuller's Swimming Lessons is as accomplished as her first novel, Our Endless Numbered Days. The story is told alternately by narrative and letters. Gil and Ingrid are married, with daughters Nan and Flora. Gil is a writer, apparently typing away in his shed in the garden, while Ingrid keeps house and tidies up the garden of their home, which is the swimming pavilion of a much larger house, Gil's family's former home on the Dorset coast. Ingrid writes letters to Gil, hiding them in apparently random books in Gil's shambolic and vast collection, and whose titles reflect the subjectof the letter, before she apparently disappears in a swimming accident. Many years later,  Gil thinks he sees Ingrid from a bookshop window, and has a fall with serious consequences for his health. His daughter Flora comes to help look after him.
Claire Fuller's writing has many nuanced themes within the story: Ingrid considers herself a bad mother, but is she, while Gil's fatherhood is perhaps questionable. 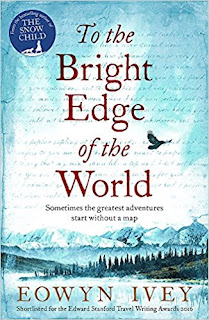 Eowyn Ivey's second novel, To the Bright Edge of the World is another epistolary novel, and also is based on journals of an expedition to explore the Wolverine river in Alaska in the 19th century. The journal was written by Colonel Allen Forrester, and his wife Sophie, left behind, while the letters are apparently written in the present by a relative of Allen Forrester's to a small museum in a former mining town on the Wolverine river in Alaska.  The journals tells of the difficulties of the expedition, and their contacts with the Athabaskan Indians in the area, while also telling of Sophie's experiments in photographing the bird life of the countryside around her. This story gives a wonderful impression of early life in Alaska from the American and Indian points of view, as well as Sophie's experiments in early nature photography. 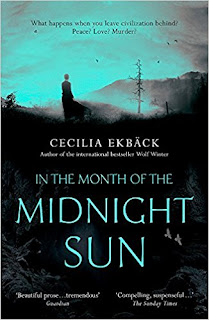 Cecilia Ekback's second novel is an historical crime/mystery in a similar vein to her successful first tale, Wolf Winter. Set in the same area of northern Sweden, it tells of the difficulties Magnus, a minerologist, has when sent north from Stockholm to investigate the murders of three men and to survey Blackasen mountain during the summer of 1856. He is accompanied by his sister-in-law, Lovisa, who has been rejected by her family for her behaviour. Magnus and Lovisa react very differently to the long summer days and absence of proper night.
There are several different points-of-view in this complex tale, with different voices telling their own version of events. This is a fascinating read, with much to engage the reader in a very different world to the current one.