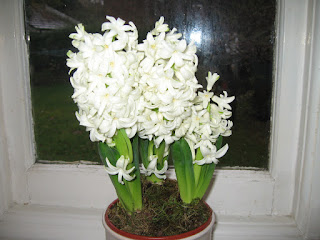 Something to brighten up a dark, gloomy, and very wet day. They are filling the room with gorgeous scent.
Posted by jaycee at 21:31 No comments:

Need to catch up on comments about books I've recently read. Michelle Paver's Dark Matter is a really haunting ghost story, set in Svalbard in the early 1920's and excellently written. Jack is poor and lonely, although he has been well educated. An offer to be the wireless operator on an expedition to an isolated part of Svalbard is too good a chance to miss, and he sets off with four other men, and several huskies to spend many months away. One by one, the other men are compelled through circumstance to leave, until Jack is finally facing an Arctic winter alone, execpt for the huskies. But there is apparently someone or something else at Gruhuken.  The feeling of tension and despair build up gradually but inexorably; I found this a frightening read even on a fine sunny day.

John Galsworthy's The Man of Property is the start of the The Forsyte Saga, which was televised a long time ago, and is still a really good read. Although I remember watching the series, I hadn't read the book, and as it was sitting on my shelves, picked it up and was engrossed. The story is mainly concerned with Soames and  Irene, his highly prized possession and wife, and the house he has built by Philip Bosinney, a young unknown architect. The introduction of various members of the Forsyte family and others of their ilk is slyly done - Galsworthy describes them as a tribe, who are all similar, and occasionally pokes fun at them. But the main emotional feeling in the book is tragic, as Irene falls in love with Bosinney, who is engaged to June Forsyte, her husbands neice.