I've been reading Maggie O'Farrell's The Hand That First Held Mine, just finished it and it was a can't put it down sort of book. Difficult not to rush it, but worth a slower read as there is so much to absorb. I haven't for some reason read any of her other titles, but will be searching them out soon. The story has two areas of focus, Lexie and Elina, Lexie leaving home and eventually becoming a respected and successful journalist, Elina a generation later, already a fairly successful artist, becoming a mother at the start of the story. The difficult birth of Elina's son and its consequences for her , and how she gradually recovers are gently and subtly revealed. Slowly the link between these two women is revealed, along with complex family stories and relationships. With its themes of love, loss, identity, marriage and the importance of creativity in an individual's life, I found this a superb read. I found that Maggie O'Farrell captured the feeling of the 1950's and 60's very well when telling Lexie's early life and affair, a time of freedom and infinite possibilities. A wonderful rich read of a book.
Posted by jaycee at 17:53 No comments:

I picked up Clarissa Dickson Wright's memoir, Spilling the Beans for 50p at a Christmas Fair, as I was intrigued to read about her connection with the Books for Cooks bookshop in London. The whole of her life story is fascinating read, even the tale of her descent into alcoholism. I had picked up snippets of her story from watching the Two Fat Ladies cooking programmes and bits of reading, but the story straight from the horse's mouth is obviously more revealing and more interesting.
Another book about food which I gathered on a library swoop just before Christmas was The Foodie Handbook: The (Almost) Definitive Guide to Gastronomy by Pim Techamuanvivit. The author writes a food blog, Chez Pim, which is quite interesting, although somewhat American in recipe detail. The book does include recipes as well as all sorts of advice on how to eat, drink, cook and be a 'foodie'. Some of the recipes reveal the author's Thai background, but as ingrediants for Thai cooking are now more easily available everywhere, there is no problem sourcing them. The tone of the writing is chatty and friendly and the photographs are lovely, although not every recipe is illustrated. Although Pim is US based, her foodie recomendations have a world wide spread and appeal.
It's not the first foodie handbook I've read: in the mid 1980's Ann Barr and Paul Levy produced the Official Foodie Handbook, which although I haven't read it since then I seem to recall as being somewhat more dictatorial as to what to eat and drink to be considered a foodie.
Posted by jaycee at 15:31 No comments: 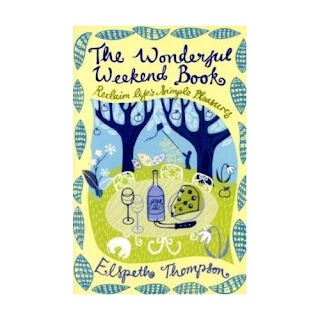 I've recently been dipping into Elspeth Thompson's Wonderful Weekend Book with some interest. There are some suggestions that could be off-putting to some readers, such as how to go about looking for a country weekend cottage, but many others are things that I and others of my baby boom generation have been doing most of our lives, along the recycling, handmade route. It's an inspiring book, but I wouldn't recommend following up every suggestion, just those that are really within your own personal reach of time, energy, and money and then only one or two at a time. There are also lots of useful suggestions of ways of involving children in weekend activities as well.
The Three Weissmanns of Westport, by Cathleen Schine is an interesting take on the theme of Sense and Sensibility, but set in modern day America. Joseph Weissmann decides to divorce Betty,his wife of over forty years and to kick her out of their apartment in Manhattan, for which she made the down payment. His two step daughters, Miranda and Annie, for a variety of reasons, move in with their mother when she is offered a cottage in the summer resort of Westport on Long Island. The story follows the vicissitudes of the lives of the three women and their circle of family and friends, including a trip to a desert resort with Cousin Lou and his wife, which offers a nice contrast to winter in Westport, as well as the ups and downs of romances of Miranda and Annie. I enjoyed this as a read and found it very amusing in places.