Window painting and The Gourmet

In the rush to get some things finished before returning to England, we ordered some glass to replace that broken in some windows. It took us about half a dozen trips to the local Bricomarche to actually obtain it, which meant spending our final afternoon before packing up, in putting in, puttying and painting the window. Still all done eventually, only another 15 windows to paint and fortunately not all require replacement glass, only about half of them. But we won't be painting or replacing the glass this visit.

Meanwhile I have been reading Muriel Barbery's The Gourmet, which I have to say I found less engaging than The Elegance of the Hedgehog. The main character, on his deathbed, reminisces about his life as a food critic, which to me seemed pretentious. A variety of other characters from his life, his wife, children, cat and dog all have their say, giving their opinions as to his character as husband, father, and pet-owner, most of which are very unflattering. Some of the descriptions of food are delicious, though. The character of Renee the concierge is introduced in this story, and further developed in The Elegance of the Hedgehog.
Posted by jaycee at 23:45 No comments: 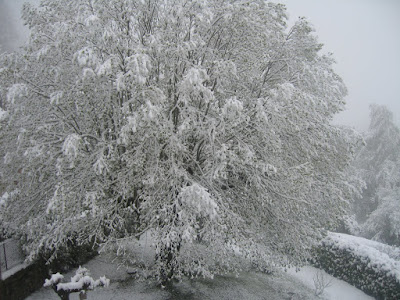 This was the view from our bedroom window this morning, complete whiteout here in Le Vaulmier. No view, just white stuff everywhere. Its thawing as we watch so hopefully it won't be here too long. Although it looks pretty, it's a bit unexpected at this time of year. I wonder where the cuckoo we heard the other day is hiding from this, or has he/she fled back to warmer places?
Posted by jaycee at 10:29 No comments: 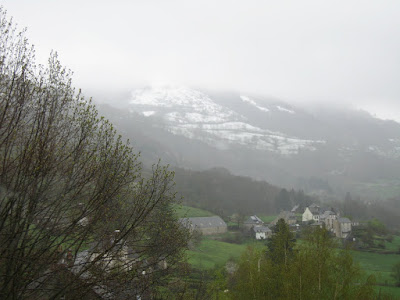 Today we have had gales, heavy rain, sleet and on the hills above Le Vaulmier, a light snowfall- and yesterday we had heard the cuckoo calling! The neighbours, met at the mobile bakers van this morning, all commented that the weather was English weather (although its pretty standard for this region at this time of year.) The above picture was taken at the end of April a couple of years ago, but the scene is the same today, and so is the temperature, I expect.
Because of the recent bad weather, time has been spent reading alternating with house painting (indoors). The reading included Colm Toibin's Brooklyn, which I loved. Tenderly written, the story of Eilis and her relocation to Brooklyn, having been unable to find suitable work in her hometown in Ireland, was captivating. The tension towards the end - will she ,won't she return to America is fairly gripping, although the question of who Eilis really loves remains unanswered.
Lucy Wadham's The Secret Life of France was a must-read for me. Itis a bit of a mix of personal recollection and experience as well as quite a lot of French history, including an overview of Nikolas Sarkozy's presidency, and comments on current life in France. Lucy Wadham has lived in France for over twenty years, firstly in Paris now in the Cevennes, a bit further south from the Cantal departement. I found it very imformative about French life, although I only spend part of the year here in France, but I felt there were one or rather sweeping generalisations about British life.
Posted by jaycee at 21:24 No comments: