A quick round up

To conclude my comments of books read before Christmas, one I really enjoyed and read very quickly was Major Pettigrew's Last Stand, by Helen Simonson. A first novel and a very readable one at that, the story opens with Major Pettigrew learning of the death of his younger brother. The ramifications of this and the possession of his brother's gun, one of a pair of very expensive shotguns inherited from their father, become almost the widowed Major's reason for living, until he begins to find friendship and a shared interest in literature with Mrs Ali, widow of the village shopkeeper. There are a number of interesting themes in the story; Major Pettigrew's relationships with his brother and sister-in-law, his growing involvement in village life, his blossoming friendship with Jasmina Ali and entanglement in his son Roger's affairs, both social and business. So although a fairly light and gentle read, there is quite a lot of meat in it as well.

Our Book Club read Vladimir Nabokov's Lolita recently, which was re-read for most of us; we are all femmes d'un certain age, after all. Several could remember reading not long after it was first published, and for many it called to mind other books read, such as Azar Nafizi's Reading Lolita in Teheran, Thomas Mann's Death in Venice, and a story from the collection A Little Aloud, which was Joanne Harris's Faith and Hope go Shopping. The themes we discussed were the excuse Humbert Humbert uses for his seduction of Lolita - that he was not her first lover; the convenience of Charlotte Haze's death for Humbert access to Lolita, the eventual murder of Clare Quilty and its awful humour. Other areas for discussion were the age of sexual maturity and consent in different societies and times, Someone pointed out that Lolita was published at a similar time to the Kinsey reports into sexuality in America. One thing that kept us reading the novel was the beautiul and lyrical quality of the writing.

Music and Silence by Rose Tremain was published in 1999, but despite being a fan of historical novels and also of Rose Tremain, I hadn't read this. Although the plot is somewhat rambling- King Christian's search for money to improve the Danish economy in the period 1629 to 1630. We learn of Christian's early life and friendship with Bror Brorson, his hiring of Peter Claire, an English musician, and Christian's wife Kirsten's affair with her German lover Otto. There are several different voices who tell their version of the story, but only Kirsten and Marcus, a young boy, brother to Emilia who is one of Kirsten's women and also beloved of Peter Claire are in the first person. The atmosphere of a Danish winter is beautifully evoked, with descriptions of coldness, fog, mist and frost. Love, sex, marriage, money and music and its importance to different people are all brought together in this woberful read of a book.

I started reading D J Taylor's Derby Day in November, and eventually finished it last night. I'm a fan of D J Taylors writing, having throughly enjoyed his previous Victorian mystery, Kept. Derby Days is about racing in the mid Victorian period. Mr Happerton buys a horse and enters it for the Derby, the great race held at Epsom; he also marries Rebecca Gresham, daughter of a wealthy lawyer and moves into her family home in Belgrave Square. For me, the book is in two parts, the first mainly setting the scene, while the second part has much more action, culminating in the running of the Derby and the cosequences of which horse won it. The caste of characters is well-drawn and intiguing and descriptions of the settings of Belgrave square, Lincolnshire and Epsom are also appealing. The plot is complex but comes to a satisfying ending, making this an excellent read, especially for a dreary wintertime.
Posted by jaycee at 17:56 No comments:

Edmund de Waal's The Hare with Amber Eyes was a lovely read, beautifully written and although not quite totally unputdownable, certainly made me want to find out the ending, how these tiny carvings or netsuke, of which the hare was one, survived their journey from person to person and continent to continent. Edmund de Waal first saw the collection when he visited Japan when studying ceramics and eventually inherited the collection, which aroused his curiosity as to how they had come to him and who had owned them in the past. The story is of the family who owned them, delighted in them, and played with them. Edmund de Waal is descended from a branch of the Ephrussi family, who originated in Odessa, then travelled to Europe to set up branches of the family business. One brother set up in Paris, another in Vienna and the family prospered. One daughter of the family  married into the Rothschilds, and the Ephrussi- Rothscild Palace still graces the Riviera today. Charles Ephrussi bought the collection of Japanese netsuke from a dealer in Paris and had a glass vitrine made to display them. The collection later were transported to Vienna, where they were played with by the children of the family while their mother dressed for dinner. Their survival of the war was due to the ingenuity of a maid, who afterwards handed them back to the family. The range of emotions the author felt on discovering different stages of his family's earlier life is wonderfully and tenderly described . There are pictures of some of the netsuke here along with more information about the book and about the author.
Posted by jaycee at 15:58 No comments:

I really wasn't keen on the idea of reading Emma Donoghue's Room when we chose it for one of our Book Club reads. I felt the story, narrated by a five year old boy about existing in one tiny room with his mother, might be on the depressing side. How wrong I was. This, despite its theme of kidnapping and captivity is fascinating and ultimately, I feel, optimistic, revealing how resilient children and adults can be. Ma and Jack live in a tiny room, in which Jack was born and his mother, Ma, tries to bring him up and to educate him to the best of her ability. Jack describes the daily routine, how Ma obtains the food and other necessities they need  and the treats they ask for from Old Nick, the only other character we meet in the first part of the story, who visits the room at night. On one occasion when displeased, old Nick cuts off the electricity, after which episode Ma, a young woman in her early twenties, determines that she and Jack must get out of their captivity and devises a plot, which involves Jack in some danger. However, the second part of the story, after a successful escape, relates how Jack and Ma become acquainted with the real world, or in Ma's case, re-acquainted. This part is very tenderly written and I felt was ultimately optimistic in its outlook. An uplifting read, despite some of the horrorrs in it.
Our Book Club discussion ranged over a number of the themes, including the real-life cases of kidnap and subsequent imprisonment which have been published , how succeessfully Jack would be re-introduced to reality, and our admiration for Ma as a resourceful mother.
Posted by jaycee at 23:06 No comments: 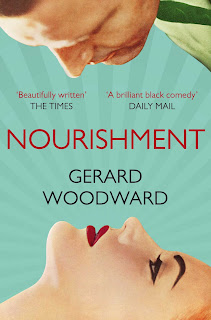 No blogging recently, for a number of good reasons, so will do a catch-up of what I've read in the past few weeks - not as much as I might have, but some good stuff, such as Gerard Woodward's story Nourishment.This was an intriguing read. Set in south London, starting during World War 2, Tory has recently learned that her decorator husband Donald is missing, eventually turning up as a prisoner of warin Germany. Her children have ben evacuated to the country, her mother has returned from her country cottage, all set to help Tory. Tory herself gets a job in a local gelatine factory, set up by a former boxer turned businessman. One day Tory receives al etter from Donald, asking her to write a sexy letter to him in return. Tory is shocked by this and feels at first she cannot follow this demand, but eventually manages to write a series of extremely erotic letters, due to her having an affair with the gelatine factory owner, which has other consequences. The theme of nourishment has several implications, one being the finding of a joint of meat by Mrs Head, Tory's mother, after the bombing of the local butcher's shop. There is quite a bit of humour in this story, and also a lot of sadness, some of being the results of war and its continuing effects on those who were involved in it.There is a write up here by dovegreyreader and a review here.  I haven't read any other novels by Gerard Woodward, but will be looking out for them, as this was well worth reading.
Posted by jaycee at 21:53 No comments: