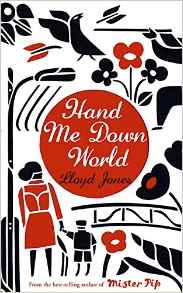 Wandering through my local branch of Waterstones, I picked up a copy of Lloyd Jones latest book, A History of Silence, on sale for £1. Never one to refuse a bargain, this one provided me with several days of slow, contemplative reading. I'm a fan of Lloyd Jones writing, having read a few of his novels, such as The Book of Fame, Mister Pip and most recently Hand Me Down World. This last was borrowed from my local library and was quite different to his other books, in that the story is about a young African woman, working in a hotel, who becomes pregnant and has her child stolen from her. Her story is told mainly through the eyes of those who she comes into contact with on her terrible journey as she  searches to find her son again. Many people help Ines, as she is called, not all of them willingly. Eventually Ines reaches Berlin, where her son is living with his father, but her difficulties do not end there. She is homeless, without money, but manages to find work and help from other people from time to time. This story gave me an insight into the horrendous difficulties people overcome in their search for a better life when they choose to migrate across the Mediterranean sea and across Europe to their destination, and how they may be helped along the way, or treated unkindly, or worse.

A History of Silence is a family memoir and a reflection on the earthquakes in New Zealand in 2011. The family memoir tells of Lloyd Jones growing up in Wellington, New Zealand, his early life there, his brothers and sisters and his parents. His mother's life seems to have been complicated,, but her story is gently teased out from the silence and dissimulation that seem to have surrounded it.
I enjoyed this memoir, which is not a traditional linear story, as a gentle, discursive read, as the writing is clear yet imaginative. It occasionally goes off at surprising tangents, but these are usually linked back to the family story or the authors reflections on it. The visit to Pembroke in search for the sailor who "died at sea" was unproductive, but gave Lloyd Jones a chance to consider his family connections with Wales.
Posted by jaycee at 18:02 No comments: