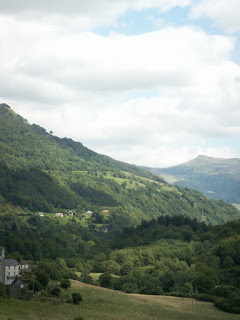 Tonight we're off to France to go and stay in our house at Le Vaulmier. As its the first time we'll be doing this, excitement and nervousness increase the usual anxiety about setting off on a ferry crossing, followed by a long drive. But it will all be worth it when we eventually wake up to the view.
Posted by jaycee at 17:11 No comments:

The reading group to which I belong recently read and discussed Alexander McCall Smith's The No 1 Ladies detective agency' fortuitously at the same time that the film was on television. The discussion ranged between regarding the book as a "comfort" read, in which life is seen as generally good, all's right with the world sort of attitude ( which I must admit is how I regarded it when I first read it some time ago). However, for those of us for whom it was a re-read, there is a lot of reality in there, with Mma Ramtswe's views on men and how some of them treat women in Botswana. The occasional flashbacks to the loss of her infant only a few days after birth brings in a grimmer reality, as does the incident with the muti and its terrible implications. The reading group felt that the film added to their enjoyment of the book, as it brought Africa to life, and although there were differences, the film was a good stab at getting the book into a visual medium. When watching it, you didn't feel cheated, or that the director wanted to get his own message across - he wanted to tell the story the book told , in the best way he could - but then as the director was Antony Minghella, that's not so surprising.

Another recent read was Noel Streatfeild's Ballet Shoes, a re-re-read for me, as I had read several times as a child. No doubt the ballet lessons I took for a while aged 10 or so, were inspired by my reading of this book. It didn't disappoint, and seemed to have held up well, considering it was first published seventy years ago - the preoccupation with earning money struck a very modern chord, given the current news items on the subject.
Posted by jaycee at 18:04 No comments:

Have finally caught up with Susan Hill's detective Simon Serrailler, having read two of the four titles so far published. They are good in a slightly old-fashioned way, very readable and its not too obvious to work out who dunnit. Also there are lots of nice interesting sub-plots about people not obviously connected to the main story, but with a lot to add to the book. I used to read at lot of detective stories at one time, but almost stopped as I found some of the more recently published ones dwelling a bit too much on the violence inflicted on the victim, and less on the solving of the crime.
I recently finished Katie Fforde's Going Dutch -I really enjoy these books of hers, escapism at its best - fast-paced, light romances but with some humour and often presenting characters who deal with life's problems in ways which are only too human and recognisable. this one was well up to her usual standard, I thought, and as I haven't read a Katie Fforde for a while, all the more enjoyable for that. I'm not sure that I like the newer covers, especially on the paperbacks, as they make the books look a bit more chick-lit than they actually are, but doubtless the publishers have done it to try and gain a foothold in that market for Katie. I find that I get a bit annoyed by publishers changing jackets, as when browsing round a public library (or bookshop) it is possible to pick up a "new" book that I read years ago when it was first published, and only on getting into to it when at home finding that fact out. I know I'm not the only person to feel that annoyance, as many of the readers in the libraries I worked in made the same comment.
Posted by jaycee at 18:10 No comments: 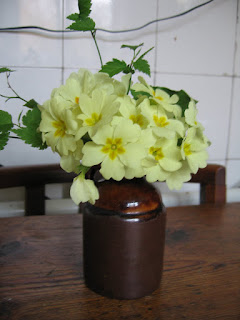 Coming back from a wekend away, the garden seemed to be almost overflowing with primroses, so I picked a few to brighten up the kitchen table.
Posted by jaycee at 22:05 No comments: 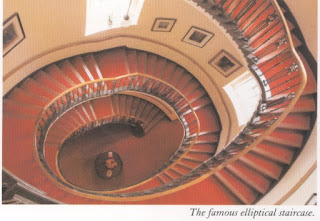 This last weekend we visited Liverpool to attend the annual conference of the Antiquarian Horological Society, which included a dinner at Liverpool Atheneum Club, a magnificent late 18th century building, with a stunningly beautiful eliptical staircase (above) going up through the building. We also visited the Prescot Museum, a small museum dedicated to the past local industry of making precision clocks and clock parts - they sent clock parts to all the major clock makers in the country in the 18th and 19th centuries. The major part of the weekend was spent in attending lectures on the history of clocks and clockmaking, some by well-known authors on the subject.