At a recent reading group meeting, we discussed Peter Ho Davies The Welsh Girl., which is the story of Esther and her life in a Welsh village, fiercely nationalistic in its attitude, at a time towards the end of the Second World War. There are English sappers nearby, building something (which turns out to be a prison camp), one of whom becomes Esther's friend. The German prisoners captured after the D-Day landings, eventually occupy the camp and are taunted by the village boys, including the evacuee living with Esther and her father. on their small farm. One of the prisoners, a young German who surrendered because he could speak a little English, learnt from visitors to his mothers pension in a tourist area, escapes and spends a little of the time he is free on the farm and builds a relationship with Esther. Some of us found this easy to get into, but then found their interest waning a bit, while others enjoyed the whole story. We had a fascinating discussion about the question of identity and "belonging", which are important themes in the story, as several members of the group had had childhoods in which they moved around a lot, so felt quite keenly the problem of belonging somewhere. I thought Esther was a well drawn character and seemed in some ways more mature than her actual age , perhaps because she had had to take on the housewifely duties of her mother after her death. Her reluctance to marry Rhys, is I feel quite understandable, as she had dreams of a life away from the village that were encouraged by her mother, yet failed to be realised because of changing circumstances.
Posted by jaycee at 12:16 No comments: 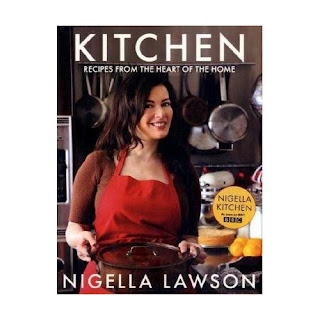 Not World Book Night books, but a passed on present from my mother-in-law. She was given Nigella Lawson's Kitchen for Christmas but as she now does very little cooking (she will be 90 later this year) and wasn't very interested, she passed it on to me. I've got Nigella's How to Eat: the Pleasures and Principles of Good Food and her How to be a Domestic Goddess: Baking and the Art of Comfort Cooking, both of which I have cooked several recipes from. Although I've dipped into the other titles she's produced, I wasn't tempted to buy them. I was interested to see this latest title but have found it a little disappointing, as it has quite a lot of cake recipes, which I'm now not so interested in cooking. However if I were setting up a kitchen for the first time, the section at the beginning which tells the reader how to just that would be very helpful. One thing I dislike about modern cookery books is their sheer size and weight, which makes them impossible to read in bed. One very useful aspect of this book, however, is the notes which tell you if the dish can be made ahead or frozen, and the what to do with leftovers sections for some dishes are also excellent.

The other free book I received yesterday was Antonia Fraser's Must You Go, the story of her marriage to Harold Pinter. I've read an extract of this in NewBooks magazine and various reviews, so am looking forward to reading one of the great love stories of our age.
I was given a World book Night book - Seamus Heaney's New Selected Poems, 1966-1987- by a friend who was giving them out at her local library. I'm not familiar with his poetry, so am looking forward to becoming acquainted with it.
Posted by jaycee at 21:34 No comments: