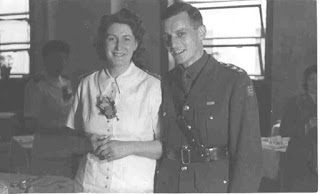 Sisters in Arms by Nicola Tyrer is a book I've been looking forward to reading for a little while. It tells the story of the nurses in the Queen Alexandra Royal Army Nursing Corps, as it became after World War 2. One of the reasons for my interest is that my mother was in the service during the war, ( when it was known as Queen Alexandra's Imperial Military Nursing Service)and saw service in North Africa and Italy, where she met and married my father. The book describes the tented hospitals my mother mentioned, when asked about her time in the war, and also describes some of the events in Naples, where my mother helped nurse a typhoid epidemic. My father was in the Royal Corps of Signals, and they met at a party in a palace in Rome, according to my mother. They married in April 1945, and spent a brief honeymoon in Sorrento. The picture is of them on their wedding day, both in uniform as were all their guests.
Nicola Tyrer's book is well researched, covering all areas of the world where Army nurses saw service, including the defeats at Hong Kong and Singapore when the Japanese overran those places. It certainly filled in some of the gaps in my mothers stories of the time she spent in the Army, nursing, as like many of her generation she didn't tell her children too much about what she did in the war. It would be a worthwhile read for anyone interested in nursing, women's roles duringWorld War Two, or the war generally.
Posted by jaycee at 23:41 No comments:

Idle pleasures and a short life

I've just finished reading The book of idle pleasures, edited by Tom Hopkinson of the Idler magazine. It's not what I would call a proper read , more a diversion, as it's a list of all sorts of pleasures (according to the Idler) with delightful black and white woodcut illustration. Some of the pleasures are simple, like leaf-catching, walking home drunk, taking a bath, while others such as breast-feeding, only available to certain people at a very specific time of their life. Yet other idle pleasures like cloud-watching, ( one of my personal favourites ) available to anyone of any age. Reading this list brought back some happy memories of time spent idling and being happy while doing so ( if doing is the right verb to use in this context).

A complete contrast is Janet Street-Porter's book, Life's Too F***ing Short. Her premise is that you should just get on and do what you want to, not to worry about what others may say. The book is divided into various chapters like food, style, travel and so on, with a number of rules to follow in each, presumably to achieve your own personal idea of perfection in these areas of life - but at the end Janet S-P says there are no rules, just make up your own. A maddening and sometimes infuriating read, probably aimed at someone rather younger than I, but quite interesting. Many of the things Janet S-P suggests I've been doing for years, others are good ideas to follow up.
Posted by jaycee at 22:58 No comments: