A bird in the chimney

Back home from France late Saturday evening, on Sunday morning I heard strange rustling noises in the kitchen. Eventually realised they were coming from the kitchen chimney, just behind the boiler and it was a bird of some sort. After a snack lunch and mowing the rather long grass in both front and back gardens, DH ( Dear Husband) decided to investigate, which meant clearing all the cookery books from the kitchen mantelpiece first. Finally the bird more or less fell out of the chimney ( there is a small opening, usually closed by a sliding piece of metal), flew to the other side of the kitchen and then out of the window which we had left open. The bird was a collared dove, who often inhabit our garden, along with lots of plump wood pigeons. The kitchen needed a good clean after that,  just what was needed after returning from a trip away.
Posted by jaycee at 14:12 No comments:


For a change, and as the weather looked fairly promising yesterday, we took a trip out, first going up to the Col d'Aulac and exploring some of the tracks up on the Plateau de Trizac. The tracks are unmade up and lead nowhere but to the summer pastures for cattle.. The Grand Randonnee 4 and offshoots from it cross part of the area, and the whole area is a popular with hikers and ramblers, especially in the spring and summer. ( video of a hike here)The pastures are dotted with wild flowers still, though not so obviously as in spring. There are also the remains of burons, the former cheese- making places, where in the past, men lived for the summer, milking the cows and making the cheeses for which the Cantal is still well-known. A very few are still active, some have been restored and put to other uses, such as a restaurant, or a gite, but most have been simply left and are falling into ruins.
From the plateau, we rejoined the road to Trizac, and then continued to Saignes, described in the Michelin Green for the Auvergne Rhone Valley as a summer resort. It is in a very pretty setting, in the valley of the Sumene river (which joins the nearby Dordogne) and is surrounded by gently rolling hills, yet it is not far to the Monts de Cantal. There are a few pleasant looking brasseries for meals and some attractive shops,  and an intriguing-looking chapel perched on a small hill, but is a very quiet place.  We plan to visit again another time.
Posted by jaycee at 17:36 No comments: 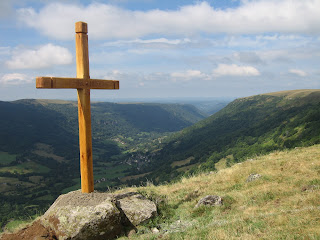 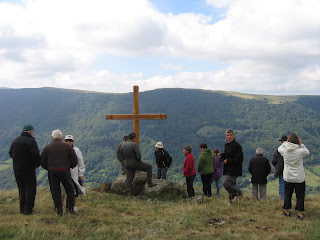 On Sunday last, this cross was put up, to replace an older one, now disappeared, which apparently commemorated an English parachutist who landed in the area during the Second World War. It is called Le Croix de l'Angle, and adds another cross on the skyline of the vallee du Mars. The cross is simply made of wood and cemented into a group of rocks. After everyone had driven up to the plateau, then walked down to the place where the cross had  been planted, all returned down to the village salle polyvalente for a simple lunch, provided by M Joncoux, the proprietor of the land on which the cross stands. Many of those who went up to see the cross were fairly elderly,  ( a few I know are well into their eighties) but found no trouble in walking up and down the steep rough ground to get to the site of the cross. Lunch was a basic meal of dried ham and sausage, followed by aligot, then cheese and finally fruit tart, made by the ladies of the village. The weather was good, fortunately, sunny but quite windy up on the montagne. The original plan was to have had lunch up on the mountain, but the coolness and strength of the wind thankfully put paid to that idea.
Posted by jaycee at 20:49 No comments: