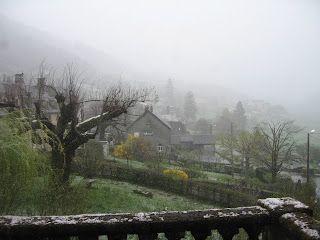 We've been here in the Auvergne for a couple of weeks, and so far spring has been slowly getting on with it; trees coming into life, the hillsides becoming gradually greener as the leaves appear. Some days have been warm and sunny, even hot, but this morning we woke up to falling snow, which is beginning to settle a little down here in the valley. Doubtless the mountain tops will covered, at least for a while, until the weather warms up again. The view has disappeared behind white wetness. But all this wetness means the rivers will be full, also the waterfalls, of which there are many along this valley, and several quite large ones in the area.Many of them are not easy to access, being up steep mountain sides and somewhat hidden amongst the forests which cover the hillsides, especially once the trees are in leaf.
While the weather was reasonable, we have amused ourselves by being active, going on a walk or two, and for my OH, going on several longish cycle rides. I've also had a swim in the new indoor pool in Mauriac., which we've watched being built over the last couple of years. It,s very pleasant, although with only two showers in the changing rooms (there are more as you enter the pool area itself) seems a bit odd.

Don't seem to have posted for a while, and haven't read as much as I'd planned to, either, so will do a quick write-up of those books I have read and enjoyed recently. Two by Alan Bennett are A Life Like Other People's, a biography of his parents marriage and life together, and Smut, two short ish stories which are very funny.
A Life Like Other People's is touching and sad, as well as amusing in part. His parents married very quietly, early in the morning, as his father could not get time off from his job as a butcher to arrange and go to his own wedding, and his mother seemed to be happy to have a very quiet ceremony, with no reception for relatives and friends. All their lives they tried to fit in with other people, but never seemed to quite manage it, not helped by his mother's periods of depression which required treatment in hospital. The nearest mental hospital was 25 miles away from their home, and his father visited every day his wife was there. After his father retired from his butcher's job, Alan Bennett's parents moved to a small village, where they tried to make more of an effort to be like other people, but still with little success.The gradual revelation of past family tragedies is very sad, but also tells of the attitudes to such events by many families in the past, and some still today. A touching read.
Smut is very different, execept for the polished quality of the writing. Two stories, one about a widow who becomes a fakes various illnesses at the local medical school, and takes in lodgers to help pay for the upkeep of her home. When the lodgers fail to keep up-to-date with their rent, an unusual way of paying their debt is revealed. The second story, The Sheilding of Mrs Forbes, concerns her son, an extremely handsome man and his marriage to a very rich but plain girl, and their joint concern to keep the true state of the marriage from Mrs Forbes.   The neatness of the final twists in these tales reminded me a bit of Maupassant, a French master of the short tale.

Grace McCleen's The Land of Decoration is very different. Judith Macpherson, the 10-year old narrator makes a fantasy land in her bedroom from bits and pieces of basically rubbish. She and her father are members of a fundamentalist Christian sect. Judith decides one day that she heard God, and he has given her special powers; she prays for snow and the next morning, there the snow is. Judith is bullied at school, by one particular boy, and when the factory where her father works goes on strike and her father carries on working, both father and daughter are harassed in their home. Despite their troubles, eventually both father and daughter realise that things can change, and the problems which their religion has caused them can be overcome. Although the writing is fairly simple in style, appropriate for Judith's age, this is a fascinating tale and prompted quite a varied discussion in the book club for which I read it.I look forward to other stories by this author.

Geraldine Brooks is a well established author, and a favourite of mine and many others . Her recent   story Caleb's Crossing is set in 17th Century America, on Martha Vineyard, and tells the story of Caleb,  who became the first Native American to graduate from Harvard. The narrator of the story is Bethia Mayfield, a young girlwho meets Caleb while exploring the island, which is her and her family's home. The young people manage to teach each other their languages. Bethia's father is a minister who aims to convert the Native Americans to Christianity through teaching; he also is preacher to the local community. He eventually takes Caleb into his own home to prepare him for studying at Harvard; while Bethia was discouraged from getting an education, other than reading the Bible.Her search in life is for an education and a husband who would be a true partner in life. Written as a diary by Bethia, with a finale written as she lies dying in her daughter's house much later.
To end this round up, I recently finished Hilary Mantel's Bring up the Bodies, her Man-Booker winning second part of the story of Thomas Cromwell..Her writing at times recalled for me Dorothy Dunnett's historical novels: there is the same large cast of characters, the position of someone not part of the aristocracy yet holding an important place at court, the intrigue and plotting of those at court, aiming to please royalty. I enjoyed this story, as I did Wolf Hall, as I do like a good historical novel whiich has obviously been well researched. I think, however, some of the hype is a bit overdone.
Posted by jaycee at 15:15 No comments: