Recently read a right mix of books, some more memorable than others. Some are a considered read, others a bit like a quick snack, enjoyable but not particularly exciting. I sort -of plan a certain amount of reading for when we visit our house in France, as I like to take a few print books, but also have a Kindle, onto which I can download whatever titles I fancy while there.

I've read a couple of titles by Laurie Graham, A Humble Companion and The Liar's Daughter. Both historical in their setting, but also about people and their complex lives. A Humble Companion focuses on Nellie Buzzard, daughter of brought into the palace  to be a companion to one of George III's many daughters., Princess Sophia. Nellie is the daughter of the Prince Regent's major-domo, so not remotely aristocratic, and she eventually marries a confectioner, and works in his shop, while Princess Sophy leads a very cloistered and contained life. George III's illness and madness form part of the story, giving the reader a different point-of-view on this devastating event.

The Liar's Daughter is set in the early 19th century, and Nan Prunty's mother claimed that Nelson was her lover and Nan his daughter. Few people believed this, and Nan spends a large part of her life trying to find the truth of her mother's claims. Despite her working as an apothecary's apprentice, then being married to an Edinburgh qualified doctor, Nan persists in her search for the truth about her parentage. A story about how much our origins matter to us, and is truth better than not knowing.

I read  and loved Sue Gee's The Mysteries of Glass, a gentle telling of bereavement, loss of faith and change in a lovely, tranquil rural setting. Sue Gee's descriptions of the natural world surrounding the small place, Lyonshall, where Richard Allen is newly appointed curate are lovely. Richard is  but trying to be of service to the parish, but also trying to resist falling in love with Susannah, wife of the vicar. The writing is fairly gentle, but also reflects Richard's inward struggle, which becomes more intense as Susannah's husband draws nearer to his death from tuberculosis. 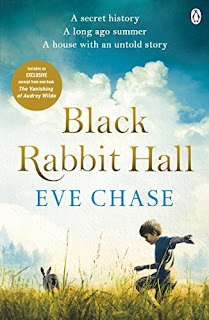 For a different read, I chose Eve Chase's  debut novel, Black Rabbit Hall, a family story set in a large Cornish house, used as a summer holiday home by the family who owned it. There are two time-lines, one set in the 1960's and the other 30 years later, when Lorna is searching for her ideal wedding venue. The story is mainly told in flashbacks, with the past narrated by Amber while the present, Lorna's, is told in the third person. It 's an accomplished first novel, with engaging characters and dramatic events to keep one turning the pages. 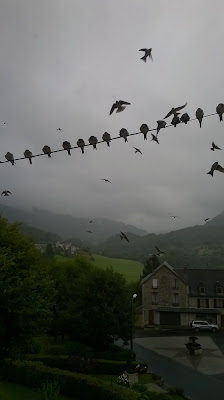 We woke up to promised rain this morning,after a fairly mild thunderstorm last night, as thunderstorms go,  and noticed the birds around our house. They looked like young house martins and were flying and darting around the windows, hiding from the rain under the eaves, and perching on the telephone wires. There must have been hundreds of them, we don't usually see them this close up. As the weather slowly improved during the morning, so the birds gradually disappeared. 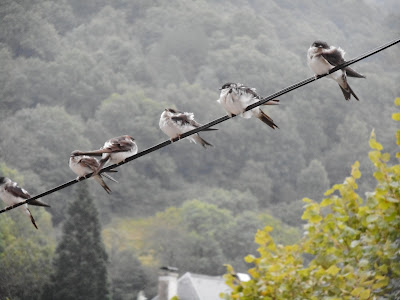