Back home in England after a detour via Switzerland to visit a young friend, who works there. She lives not far from Lausanne, which she visited with us and then after lunch we went to Gruyeres, 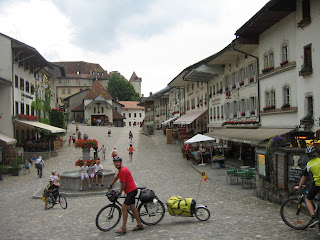 where the cheese comes from. We had a quick glimpse in the cheese storage warehouse, where all the cheeses are turned, washed and so on by robot now and then went up to the village itself, which is very pretty, full of nice looking restaurants and hotels. It's almost a perched village with lovely views of the surrounding alps, a chateau which looks a bit like Colditz,and a museum dedicated to the work of H R Giger, creator some of the artwork and visual effects for the film Alien. Gruyeres is very popular as a tourist destination in Switzerland. Lausanne is a large, busy city on the shore of Lac Leman ( or Lake Geneva, if you prefer, but it is in French-speaking Switzerland), with a cathedral at the top of the old town, to which we climbed up a good part of the way. The weather when we visited was lovely, but it started to thunder and rain while we were wandering round Gruyeres in the late afternoon. There are lots of small pretty towns along the shores of the lake, with harbours, promenades, parks and other facilities for recreation or just relaxing walks. 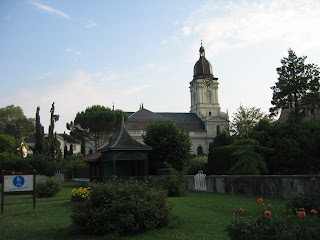 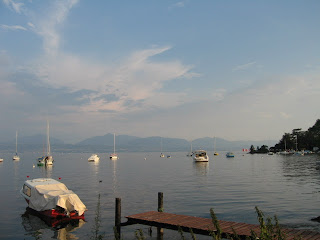 We visited Reims on the way back through France, staying for the night. It seemed the whole city was out eating in the evening, or just walking up and down , enjoying the evening being a little cooler than the day, which had been very hot.
Posted by jaycee at 21:31 No comments: 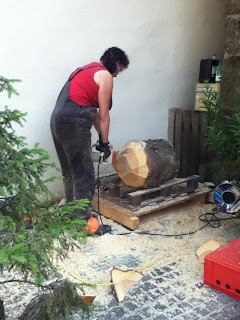 Friday evening we were invited to the opening of an exhibition of sculptures by Ebba Kaynak, a German sculpter whose material s wood, carved using mainly a chain -saw. The forms she develops are inspired by nature, in all its variety. Ebba also demonstrated how she starts one of her pieces, reducing a large log to a shape she would then go on to finish another day. The exhibition is on at the Salle Polyvalente, next to the Mairie in St-Vincent de Salers, a small village set in a wonderful and impressive site in the Vallee du Mars, with huge rocks towering above it. There are several walks in the area, through the forests which partially cover the valley sides, also many waterfalls or cascades, although spring is the best time to see them, preferably before the leaves appear and hide many from view. 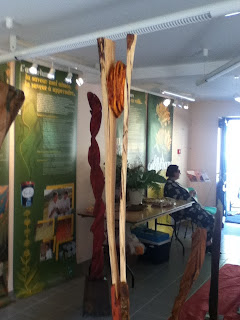 After watching Ebba demonstrate her art, we had an introduction to the exhibition, a few words from Ebba Kaynak about her work and subject matter., followed by the nibbles and drinks. A very pleasant start to the French holiday weekend, as today is July 14th, Bastille Day a French national holiday, when all France commemorates the storming of the Bastille prison  in Paris, freeing the prisoners and starting the events of the French Revolution.
Posted by jaycee at 14:05 No comments: 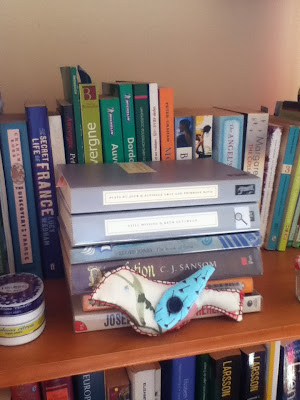 More comments on what I've been reading recently. I've enjoyed, if that's the right word for my feelings about reading a detective story in which a number of elderly women are brutally murdered, Susan Hill's A Question of Identity, one of her Simon Serrailler novels. The suspense in these stories is well maintained, and the descriptions of other family members' lives adds another element. Simon's relationship with his widowed sister and her growing children helps relieve the tension of the murders he is investigating, adding a more humane perspective. I've read most of this series, I look out for them when visiting my local library.
I thought John Mullan's What Matters in Jane Austen intriguing when I read reviews of it on various blogs and newspapers a while ago, so when I read it I thought it fascinating. I've read and re-read most of Austen's novels, since first being introducd to Pride and Prejudice when studying  A level English many decades ago. The Austen novel we were actually studying was Persuasion, but our English Literature teacher suggested we read Pride and Prejudice as an introduction. We just had to read it, not write notes or an essay on it, although we did have a fairly brief discussion one lesson, I'm sure.  So John Mullan's book can only increase my interest in Jane Austen and her books, as the topics he covers are aspects of her writing, her attitudes, reflections of late eighteenth, early nineteenth century life in England.
The Road by Cormac McCarthy was made into a film, recently shown on television. I saw it before I read the book, which I don't normally like doing, as the pictures put in my head by the film tend to be the ones that I see when reading. In this instance, I think the film was fairly close to the book, which I found a fairly emotionally harrowing read. Some of the discussion at the book club meeting at which we discussed this book centred round the theme of the ending - was it ultimately hopeful to some degree, or not? Our small group couldn't decide, so we had to each make up our individual mind. As a picture of a dystopian future for the planet and for all life on it, including human, it does not offer very much in the way of optimism, perhaps just an odd glimpse now and then, including the way the father is prepared to sacrifice everything for the son. Some of the scenes described in the book are real horror-story stuff, but then that is the nature of a novel about a world in which all life has changed catastrophically.
Posted by jaycee at 18:08 No comments: 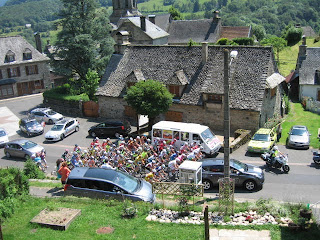 Just to prove that perhaps France IS mad about cycling, while the Tour de France is going on its way down in the Pyrenees, locally  there was the 4th stage of the Tour du Cantal cadet ( for young riders of 15-16 years) which started in Le Vaulmier this afternoon.
People began gathering just after midday for the 3pm start, until the little place was almost jammed with cars disgorging young cyclists and their bikes. Just after the start the place emptied of cyclists and cars and returned to its usual peace and quiet.
Posted by jaycee at 21:12 No comments: