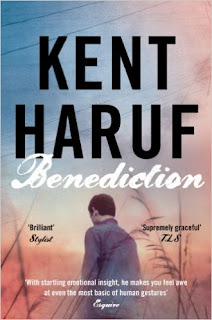 Kent Haruf's Benediction is a quiet, sad story about an old man dying. Put like that, it would seem to be not a book one would search out and read. But do search it out and read it, because Kent Haruf's writing about the daily lives of his characters is the best. His prose is spare, quiet, thoughtful and  immensely readable. His characters are ordinary people living ordinary lives, which is what makes his books so sympathetic, because his characters and their lives are just like our own, immediately recognisable.
Dad Lewis, retired businessman, is dying through a long, hot summer in Holt. Cared for by his wife and daughter, he is visited by old friends and looks back over his life in the small Colorado town. He also reflects on his relationship with his son Frank. The Lewis's next-door neighbour  looks after her young granddaughter, and a recent arrival in town the preacher Rob Lyle has problems of his own.
I have enjoyed Kent Haruf's writing since first reading Plainsong many years ago. He is not a prolific writer, but one who makes every word count . 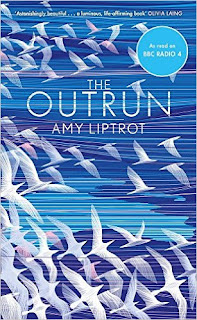 Amy Liptrot's book The Outrun is a completely different take on life.  Brought up on a farm on Orkney, Amy leaves the island for university and then life in London, where she throws herself into its vibrant social life, and the drinking that goes with it. Gradually as she becomes increasingly reliant on alcohol, she loses jobs, homes and lovers. Eventually she enters rehab and decides to leave London ,returning to Orkney for a summer job which involves counting corncrakes for the RSPB. She decides to spend the winter on Papay, the small island she had spent summer on and writes - marvelous descriptions of of the wildlife, the clear starry skies, sea swimming and snorkeling with a local group and meditating on how she can continue to be free of the alcohol addiction which blighted her younger life.
Amy Liptrot comes across as warm, friendly and self sufficient. A wonderful read- part memoir, part nature description, showing how paying close attention to our surroundings can be a source of healing.