A bit of eating and dancing

We started the evening with a few country dances, to the music of two violins, and then sat daown to the feast, starting with mushroom soup with cep mushrooms, followed by local cured jambon cru and dried sausage. this was in its turn followed by the venison, of which we all had a small taste. The animal had been donated by a local hunter, and cooked by his wife. A selection of hot vegetable dishes came next, such as rice cooked in milk with nutmeg and almonds, and pumpkin and potato gratin. Local Salers cheese followed, and finally there was a choice of desserts, including pumpkin tart, cake made with chestnut flour, chocolate,walnuts and hazelnuts, or made with chestnut flour and apples. As we were munching our way through these last delicacies, someone was roasting chestnuts outside, and these completed the feast, together with some Limousin cider. Then the country dancing resumed  and continued until late into the night. A really lovely way to spend All Hallows Eve. 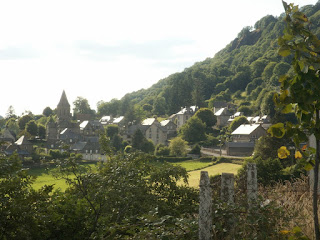