How do you choose what you read? 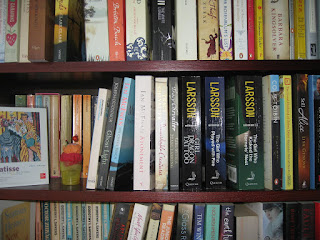 When I worked in public libraries (seems a lifetime ago) we used have displays with accompanying posters, flyers and leaflets,  which went round different libraries, called "Well Worth Reading". The comments that went with each title were short and to the point, aimed at encouraging readers to pick a title and read it. Most displays were based on a theme, such as "A Child's Eye View" with relevant recent titles. They were usually successful in that readers could easily find something fresh to read; one of the most successful was one containing humorous novels, which came to the library one rather bleak February - those display shelves were almost empty in a few days!
I recently had to choose some books to take to France while visiting our house there, and while I find a Kindle e-reader very useful, I still like having access to some printed material. I could buy French paperbacks in the local town, but would find reading them fairly hard work , and would miss out on some English reading. I usually visit my local public library and take a few likely titles out, I download a few titles from A***** and can choose more from that source if necessary. I've just read dovegreyreader scribbles ,  who recommends The Literary Review as a source of information on the next good book to read.
Another useful source of reading matter is charity shops; some are better than others, depending on the area in which you live, but many have collections of paperback books, and if you're lucky, some new or at least new-ish titles.
Personally I prefer a serendipitous approach to finding something new to read, and don't have a huge pile of to-be-read books by my bedside. There are titles in which I'm interested and would like to read, but don't always feel I must read it now this instant - sometime in the future will do.
I have a list of a few sources of information about books on the page "a few links to help choose books"
Posted by jaycee at 17:24 No comments:

A visit to a chateau

Whilst staying in France this summer, I took the opportunity to actually visit one of the local chateau open to the public, the Chateau de la Tremoliere, at Anglards-de-Salers. I've occasionally driven through this village and past this chateau, but never stopped to visit. 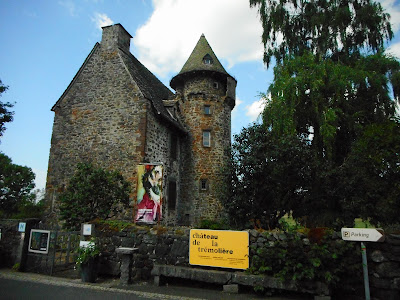 Although only a very small building by chateau standards, it has a small collection of tapestries, dating from the latter part of the 16th century. They were made at Aubusson and Felletin ( which is not far from Aubusson) using locally produced wool, and dyed with natural dyes, produced from plants from the area. The exhibition has a small sample of plants and the colours they produce on wool. The tapestries were discovered in the attic of the chateau in 1860, after the building had been acquired by the local commune to house parish clergy. They were apparently in a poor state, and were sent to Gobelin in 1923 for restoration and preservation. A dozen were sent, but only 10 returned.
Because of the subject matter of the tapesteries, the collection is known as Le Bestiaire Fantastique: (the Fantastic Bestiary) most contain some sort of animal, real, imaginary or mythical. 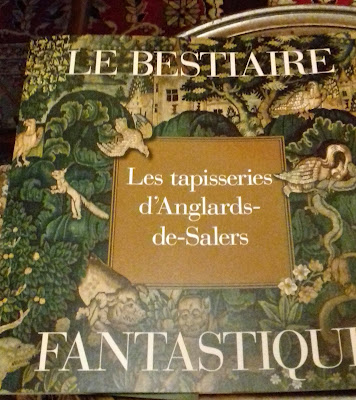 Because visitors are not allowed to take photographs, and the lighting is kept at a relatively low level, I didn't take pictures, but bought the small booklet which shows the tapestries along with details from parts of them; a useful aide-memoire.
There is also a garden attached to the chateau, Le Verger de Deduit, laid out along medieval lines and based on the Romance of the Rose, a medieval poem. It is very pleasant to wander in, and there is a handout giving details of the planting.
Each the chateau also hosts an exhibition of contemporary art; this year the artist is Gael Davrinche, a French painter and sculptor.
There are a few small chateau in the Vallee du Mars, but all are private homes, not open to the public.

A year of reading (to be continued..)


Since I last wrote anything on this blog, almost a year ago, I've not stopped reading, but just didn't feel inspired to write about the books I have read.at the time. Much of my reading is picked pretty much at random from my local public library shelves - I look for authors I may be familiar with, but have a newish title I haven't yet read, or I will try an author whose work I've read reviews or blog posts about and which look interesting.  I enjoy catching up with new authors, but I don't feel compelled to read a new author/book the minute its published.

Some of the more memorable reads of the last few months have been Tim Pears West Country trilogy, beginning with The Horseman, continuing with The Wanderers and ending with The Redeemed. I loved the quality of writing, which although seemingly slow and gentle yet describes some violent actions and emotions quite plainly.Since the novels are set in the period just before, during and after the First World War, some of the events described are quite dramatic. He also seems to be able to imagine how life was lived at that time; how most people rarely went further than a few miles from their farm or place of work, how they communicated with each other without any modern methods, only talking directly or writing letters. 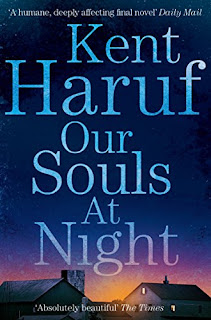 Another writer who has a similar quiet way of telling a story is Kent Haruf, several of whose novels I have read in the past. His last book, Our Souls at Night, is the story of Louis and Abbie, neighbours in the small town of Holt. One evening Abbie asks Louis if he can spend the night with her just for company. Their relationship develops slowly and gently. During the summer Abbie's grandson Jamie comes to stay with her, as his father Gene is divorced from Jamie's mother. However after a fall in which Abbie breaks a hip and is hospitalised, she moves away to be nearer Gene and her grandson. Both Addie's son and Louis daughter seem to be unhappy about the relationship between Abbie and Louis, which brings them both much happiness and joy in their later years.
Is this disapproval because the young cannot conceive of older people having an emotional life,of finding happiness and joy in the company of a member of the opposite sex to whom they are not married, or is it perhaps jealousy at their parents happiness, while they themselves are feeling upset and unhappy? 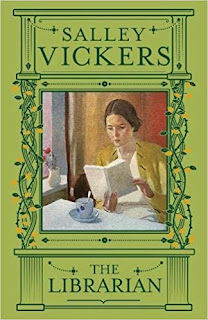 I picked up Salley Vickers The Librarian as soon as I saw it appear o the library's shelves, and although I enjoyed it, I finished it with a slight feeling of disappointment. Sylvia Blackwood, a young, recently qualified librarian, arrives in East Mole, a middle England country town in 1958. She is very enthusiastic about her role, re-arranging the children's library to make it more user-friendly, giving talks to local schools, and encourages any child she meets to join the library. She befriends Millie, her neighbours daughter and urges her to join the library.
One of the themes of the story is the impact of the 11+ on children of that era, and their future life chances. ( There are still a few local authorities in England who administer the 11+ exam)
Sylvia has an affair with a married man, who very bright young daughter leads Sam, a local lad ,somewhat astray, but all turns out well at the end.
I have to say that this book left me with some unanswered questions., despite its enthusiastic support of children's librarians and all they did and still do to support and encourage children to read widely and with enjoyment. This may be because I can remember some of the things Salley Vickers describes, although my career in libraries started a decade later n 1968 and things were beginning to change.