Back home from France, and we seem to have brought some sun with us for a while. Last Saturday and Sunday were both sunny enough to get out and do a bit of much-needed tidying up in the garden. And back home to a heap of post, with lots of interesting journals to read, such as newbooks magazine, and the Persephone Biannually, from Persephone Books. And an email from a book Club member, with a new list of titles for the next few months. So I'd better get reading.
Posted by jaycee at 19:40 No comments:

One of the things we usually like about coming to the Cantal, and to the Vallee du Mars in particular is the changeability of the weather. Being a mountaineous area, the weather seems to change hour by hour or on some days minute by minute. The day can start off clear and sunny, become cloudy before lunch, and end with a  beautiful clear sunset. Or it can start miserable and stay that way for the next week - just like England. During our three weeks here we have had so far, rain, snow, hail, thunderstorms, gales, and a very few days when it has been dry and sunny all day. It has also been very cold for much of the time, and overcast and miserable.
Posted by jaycee at 22:19 No comments: 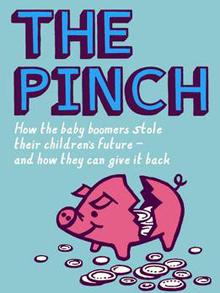 I've recently finished reading David Willetts "The Pinch: How the Baby-Boomers took their Children's future and why they should give it back."( reviews here and here) As a baby-boomer (born 1946) myself, this was an intriguing read. Some of the assertions David Willetts makes don't seem to apply to me, although many do. I think, when he asserts that there was a rise in women's increased access to higher education, he overstates the case somewhat. I entered post 18 education in the later 1960's, and not all my school fellows went on to university (as I didn't) but to other forms of higher education, such as teacher training college, colleges of commerce or advanced technology, where the qualifications they were aiming for were more vocational in nature than a degree. Most of these type of higher education institutions later became or were absorbed into universities. The actual rise probably came a bit later, in the 70's. The first chapter, however, does give a quick and interesting potted social history of marriage and property in England
I found the number of statistical tables interesting, although sometimes a bit overwhelming., and occasionally the saying "there are lies, damned lies and statistics" came to mind. Willetts also states that educated middle class women have taken jobs that might previously have been done by working class men, thus reducing social mobility. But many of the old working class jobs in heavy industry, such as steel-working, mining, car-making, and similar have disappeared, as those  industries have been sold off or consigned to history. And although Willetts gives perfectly valid reasons for the baby-boomers to give their children a future, he doesn't, as far as I recall, say exactly how this should happen.

As an antidote to this serious stuff, which is nevertheless perfectly readable, I 've just read Michael Wright's follow -up to C'est La Folie, titled Je T'aime a La Folie, and which I enjoyed just as much as the first book.
.
Posted by jaycee at 12:38 No comments: 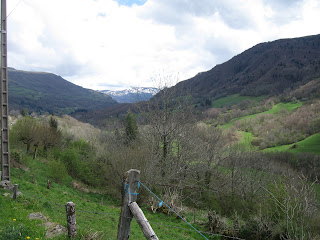 At last we have had some reliable(ish) sun and warmer weather here in the Cantal, so took the opportunity to go for a walk, having invested in some new walking boots and jackets, courtesy of trip to Decathlon. We walk from Le Vaulmier along through the woods to St Vincent-de-Salers and back by the same path. A nice not too long or difficult walk, a good test of new boots. Walking is very popular here in the mountains, the Hotel des Voyageurs in Le Falgoux caters for walking holidays, some through various travel companies, some just for individuals. 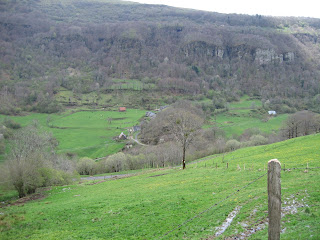 As there has been lots of rain recently, the streams and waterfalls along the way were all full and quite impressive..This one we had to ford, but it was easy. 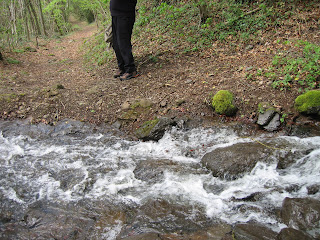 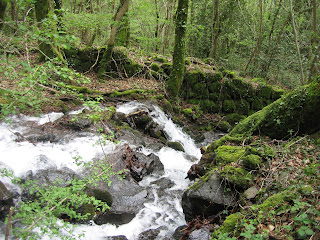 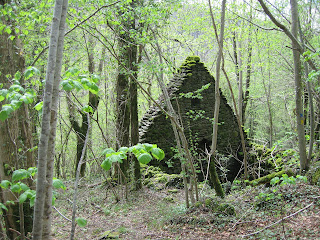 We also saw a ruined barn or possibly house. 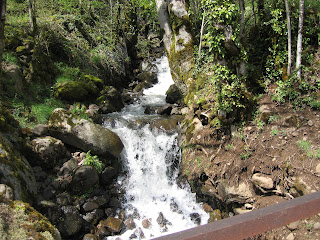 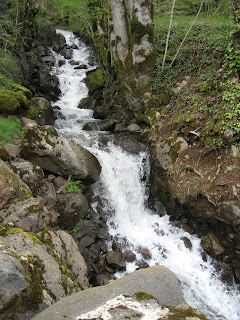 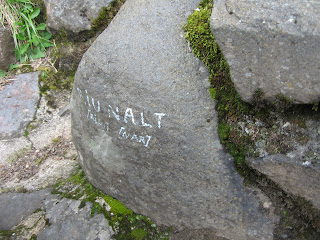 This waterfall is at the entrance to St Vincent, but not easily visible from the road; you have to walk up a little way to appreciate it.
We also saw lots of woodland flowers along the way - orchids, violets, lungwort, viper's bugloss, cowslips and so on. All just coming out after the cold weather of the past few weeks, just like the people.
Posted by jaycee at 12:07 No comments:

I've recently finished reading A S Byatt's The Children's Book(interview/review here). I have to admit this is the first Byatt I've read, although I did get about a third of the way through a library copy of Possession, before it had to be returned, and I didn't for a variety of reasons  reserve it again. However, The Children's Book is one of the most amazing, absorbing and engrossing reads I've experienced. The cast of characters seems huge but in fact is a few families, the timescale seems immense but is in reality that period at the end of the 19th century, ending just after the First World War, and the setting is basically London, Kent and later Germany in the beginning of the 1900's..I found the references to the art of that period easy to visualise, as I'd watched the recent TV programmes on Art Nouveau, called Sex and Sensibility, presented by Stephen Smith, which was both very interesting and informative. Unfortunately I read this on my Kindle, so missed having the beautiful cover to look at whenever I closed the book, as it would have added to my enjoyment. I think the hugeness of this book comes from the range of emotions described and felt by both characters in. the story and the reader, as well as from the range of events and characters.
Another fairly long read was Vere Hodgson's wartime diaries, Few Eggs and No Oranges, published by Persephone Books. Social history at its best, as Vere describes the Blitz, doodle-bugs, V1 and 2 rockets and other bombs that fell on London and elsewhere in the country from 1940 to 1945. She also describes the difficulties of getting food as well as household necessities such as saucepans, kettles and sheets, when setting up her own flatlet. It brought back memories of my grandmother's stories of the Second World War. She lived on the Isle of Wight and though there was some bombing there, they were under the flight path of bombers aiming for Southampton and Portsmouth, both badly damaged during that time.
Posted by jaycee at 12:53 No comments: