Reading under the bedspread

New bedspread is now made and on the bed it was destined for. 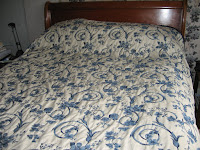 Recent reading has been fairly random, some book club reads, some just following my own interests.
Book group reads have included Sadie Jones 'Outcast' a story set in the 1950's., and is a tale of loss, of love and growing up in suburban Surrey in the post-war years. There are boken families, broken and damaged people and yet the possibility of happiness at the end. The main character, Lewis, is described on his release from prison and returning home. We next read of his childhood, of his father's returning from the war and settling back into normal life. Lewis loses his mother in a drowning accident, but is unable to talk about it to his father. His father re-marries and Lewis is sent away to school. The build -up of unresolved tensions of love and loss - Lewis's increasing desperation, his self-harm and drinking, his relationship with the various members of the Carmichael family, near neighbours and work colleague of his father, all are beautifully and gently but clearly described. Lewis's friendship with the younger Carmichael daughter may be the hopeful end to the story.
Miss Pettigrew Lives for a Day, by Winifred Watson, first published in 1938 and re-published by Persephone Books was a delightful and quick read for me. The story of a poor, dowdy and underpaid governess who is wrongly directed to an actress's apartment for a job. She is immediately drawn into Miss LaFosse's glamourous life, and acts as friend, chaperone, replacement mother,as well as undergoing a complete transformation during the day. All ends well, and Miss Pettigrew finds herself more happily settled that she could have hoped for.
Posted by jaycee at 19:04 No comments:

I recently picked up Mary Portas' book on How to Shop, out of curiosity - I had watched some of the TV programmes on which the book is based. The book, like the programmes is well presented, but does it really tell you how to shop for clothes? I've been shopping for clothes for decades now, and I feel that it didn't give me much in the way of guidance, probably because I don't actually spend that much money on my wardrobe. I'm still not sure about which shopping tribe I belong to, but I can't say I'm really worried about it - never did like being one of a tribe anyway, I'd rather be independant and make up my own mind. I thought the when to shop section quite useful, even though I'm unlikely to follow the advice. 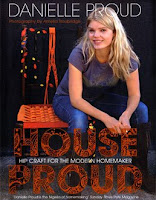 More to my taste was Danielle Proud's House Proud: Hip Craft for the Modern Homemaker. This is about how to achieve a quirkily stylish home on a budget, and includes all sorts of ideas for furnishing and decorating a home. As I've been doing this most of my life, some fresh ideas were very welcome - my ancient copy of Jocasta Innes The Paupers Homemaking Book is almost unusable because of its disintegrating condition. Danielle's ideas are fresh and modern with quite a lot of emphasis on the current recycling trend.
Posted by jaycee at 19:06 No comments:

Having ploughed through some crafty books recently, in search of inspiration, I finally got round to cutting out the fabric I've had for a while to make a new bedcover. The colours are blue and ivory, that is blue flowers on an ivory background. Well, its now half made, and will be finished this weekend. Ideas gleaned from the gardening book I've now returned to the library are put on hold, as the back garden is too boggy to walk on at the moment, what with snow and then a month's worth of rain in a day on last Monday.
A really lovely read recently was Amitav Ghosh's Sea of Poppies. 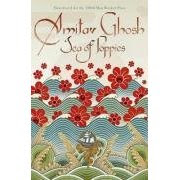 This wonderful historical novel, starting out in early Victorian India, has a huge cast of characters and a wide sweep of events, from the death of a husband and rescue of his wife from suttee (or self-immolation) to the preparation for the first Opium war in China in 1838, and the shipment of migrant workers to Mauritius. All manner of fascinating details of life at this time are here, from poppy growing and opium production, to the table placements for an early Victorian colonial dinner party and the arrangements of sails on a converted slaver, to the costumes and dress of sailors, Indians, convicts, rich and poor, high and low. The characters include Indians from village peasants to a Raja, Chinese sailors and others, a variety of British inhabitants of India, a mixed blood American freeman, a young French girl and include the ship, the Ibis, on which most of these people end up. The language used to tell this story is a complete mix of Bengali, Bhojpuri, English slang of the period, pidgin English and more, but nevertheless carried this reader on through the tale. I can barely wait for the next instalment to be published, so much do I want to find out what happens next.
Posted by jaycee at 23:53 No comments: