While in France I read R C Sherriff's The Hopkins Manuscript, first published in 1939 and re-published by Persephone Books in 2005. I really enjoyed this somewhat melancholy tale of the moon hitting the earth and the consequences thereof. The build -up to the event is slow but inexorable and the catastrophe itself almost an anticlimax compared to the disasters which follow. The main characters and how they survive and deal with this momentous event, both physically and psychologically are the core of the book as well as the main interest. The whole tale, given that it was first published in 1939, could be an awful warning as to what might happen in the event of the coming war in Europe. Not as to actual events, but as to how human beings might actually behave and think in a crisis. I liked R C Sherriff's style of writing and his descriptions of the variety of human emotions is sensitive and tender. An intriguing read. 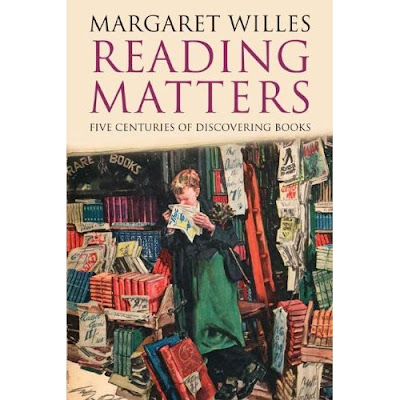 Margaret Willes Reading Matters was an absolute must-read for me. A history of book collecting, reading,(mainly private) libraries with book selling and buying thrown in proved an irresistible reading experience. This book is not without flaws, though as the subject is so vast ,how to write a coherent history of such a time span is almost impossible. The author has been around books all her life, as reader, author, publisher, and has obviously done a huge amount of research on the subject. Although arranged chronlogically and mainly covering the private libraries of such people as Bess of Hardwick through to Dennis and Edna Healey, there are various sidetracks followed, such as the booksellers centred around St Paul's churchyard, book clubs through the ages, which are not quite the modern phenomenen we like to think they are. For most people, this would not be the lightest of summer reads, but for a retired librarian it was almost an essential one.

On a slightly lighter note, I read Jhumpa Lahiri's The Interpreter of Maladies and found it touching and subtle. Beautiful observations of human behaviour at certain points in time or at particular events, carefully and quietly described, leaving the reader to come to their own conclusions as to why the behaviour described happened.

An even lighter read was Rachel Johnson's Notting Hell, a wickedly tongue-in-cheek description of life in the exclusive private gardens of Notting Hill, home to milllionaires, super yummy-mummies and celebrity figures. Quite funny, but I thought the name-dropping of shops, restaurents and so-on got a bit tedious. The plot was delicate, how Clare wanted a baby but seemed unable to conceive and Mimi had had three infants soon after her marriage to Ralph, who had inherited his house in the exclusive area from his parents, but not the wherewithal to sustain the lifestyle. The story is told in the first person, alternating between Mimi's and Clare's point of view of events.
Posted by jaycee at 12:33 No comments:

Driving back across France, we arrived in Normandy and when starting to look for a hotel for the night, found one in the small town of Gace. As we has passed through several small towns who were celebrating the 14th July with fetes and were therefore jammed with visitors, finding a hotel which was open , clean and comfortable, and with a good menu was a relief. The bonus came in the form of a live concert in the square, followed by a superb firework display in front of the chateau (now a museum) A splendid, delicious way to spend our last evening in France for a little while. The weather was superb too, being warm and sunny with a clear sky. 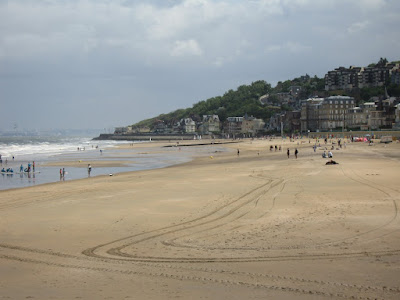 The following day we headed along the coast, visiting Trouville with its enormous beach,Casino and a huge outdoorswimming pool, then on past Honfleur and over the Pont de Normandie to Le Havre and the ferry. 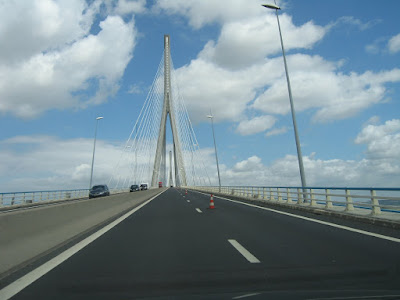 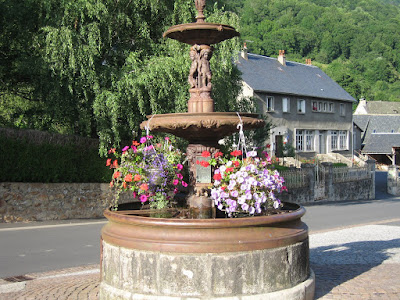 Still hot but green in the Cantal, although there is a cooler breeze today. We're packing up for a brief return to home and garden in England,and according to French meteo, there is a good chance of rain on the way back to the ferry. The picture shows the fountain, put up in1894 by public subscription, which at the moment has no water in it, because there is a water shortage here - we have been asked not to water gardens, not to wash cars, or refill swimming pools. The same happened last year, which was also a fairly dry year. Luckily for us, we don't have a pool, are not great car washers (a couple of times a year is more than often enough) and the garden here is very small, with nothing in it which needs watering.
Posted by jaycee at 18:17 No comments:

Back in the green but only marginally cooler Cantal. We have found the current heatwave tiring, so tended to have sat around reading, although we have managed a few swims at the local Centre Aquatique in Mauriac.

I haven't yet read Angela Huth's novel Landgirls, but have just finished reading the sequel, Once a Landgirl, which was an enjoyable read, not too demanding, but engaging, so a good holiday read. The story of Prue, a landgirl on a Dorset farm during World War 2, this sequel continues Prue's search for meaning and contentment in post war England. The atmosphere of the period is subtly presented, along with the emotional dilemmas of those settling back into ordinary life.
Posted by jaycee at 21:47 No comments: 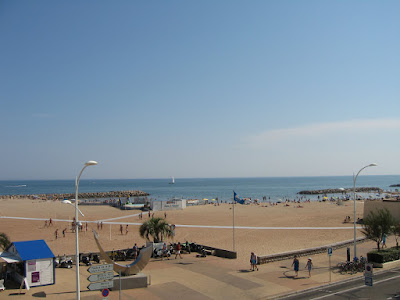 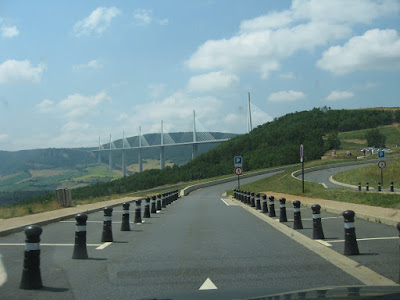 We have just spent the last few days at the beach. We made a quick booking via the internet for a hotel at Valras-Plage, near Beziers and headed down the autoroute, over the viaduct de Millau and on to the sea. We've been promising ourselves a swim or two in the Mediterranean for over a year and now at last we've made it. The sea was beautiful and warm, 21 degrees C when we there, and seemed very clean.

The beach at Valras is huge, about 3km in length and once the sun is up the sand is burning hot, so flip-flops or sandals are a must. It does make drying off after a swim quick, though. Ater only a very few days of sun, sand and restaurent meals, we are now back in the only slightly cooler greenery of the Cantal. We drove back across country,following the valley of the Lot for part of the way, which was deliciously cool and inviting.
While we were there, the small blue roofed hut opened up for business - it was a library. Details of it can be found here. I wonder if any British libraries do the same sort of thing?
Posted by jaycee at 15:40 No comments: