All the light we cannot see 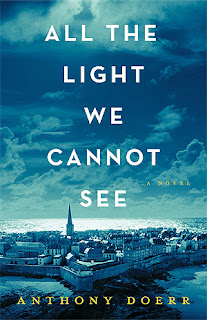 A recent read I really enjoyed is Antony Doerr's All the Light We Cannot See.  The title comes from the radio waves and other forms of electro-magnetic communication waves which we cannot see with our eyes, yet which surround us everywhere. Apparently Antony Doerr saw someone on a train beating his mobile phone on the armrest of his seat when the train entered a tunnel, thus losing connection, and thought how we take such communication for granted these days. This was one of our Book Club choices and I was really glad to see it on the list. ( We usually choose 5 -6 months worth of titles at a time, and meet every three weeks for discussion along with coffee and cake)
I hadn't read anything by this author before, and will now seek out some of his other titles.
Set during, before and after World War Two, this is a complex book, with many different themes, yet is so beautifully written that despite its length it seemed to be an easy read. Each chapter is fairly short, so there is time to really grasp the flow of the story. Partly a coming-of-age story, as both main characters, Werner and Marie-Laure, are very young during the story and only teenagers when they finally and briefly meet; partly about the impact of radio communication, Werner is a young German radio whizz; partly about blindness -  Marie-Laure has been blind since the age of six; partly about the Nazi's hunt for  art treasures in the countries they invaded; despite these varied themes the story combines them in elegant, lyrical prose. The discussion we had during our book Club meeting ended with a desire to have a group outing to St Malo, a place which some but not all had visited, and which is also an important character in the book.
Posted by jaycee at 21:45 No comments:

Labels: All the light we cannot see., Antony Doerr

Last of the summer reading 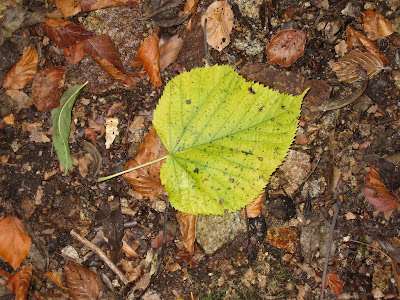 Autumn is definitely here now days are getting shorter with darker mornings and evenings and I need to catch up with comments on some of my late summer and early autumn reading.

Having read Lila, the last of Marilyn Robinson's trilogy set in the small rural town of Gilead first, I thought I'd better catch up with the others. Gilead is the first and a beautiful read. Written as a letter to his young son by John Ames who is now aged and recalling his past life. He often refers to "your mother" but never mentions her name when talking to his son, yet it is apparent that he loves and values her. The letter explains John Ames' whole life, his close friendship with the Presbyterian minster the Rev Boughton, his father and grandfather, who was an abolitionist and eccentric in his behaviour. The reflections on life in a small mid-western American town in the late 19th and early 20th centuries are eloquently described and the theology by which John Ames lives is almost more humanistic than Calvinist, although he frequently mentions the grace of God throughout his reminiscences.

Beloved by Toni Morrison is a book that escaped me when first published, but the beauty of a trip to my local library and a browse along its shelves is that it reveals several titles that I feel like reading; this title was one such. Beloved won the Pulitzer prize in 1988 and Toni Morrison the Nobel prize for literature in 1993. This is a complicated story about slavery and its consequences in the Southern states of America. Sethe and her daughter Denver are living in a house which previously belonged to Sethe' mother-in-law and which is haunted. Paul D arrives, a former slave and friend of Sethe's husband who has disappeared, and manages to expel the ghost, but a real life girl appears, called Beloved, the name of the infant whom Sethe killed when she was found after running away from the plantation on which she was a slave. Beloved is welcomed into the household, and gradually seems to take over. Sethe loses her job which provided the only income to the household but still spends money on providing beloved with whatever she demands. Eventually matters come to head; Denver asks a group of local women to help. When the group arrive to visit Sethe, Denver's employer, a white man arrives to collect her for work, but Sethe thinks this is a re-enactment of a past event when she was escaping slavery. However a tragedy is prevented, but in the comings and goings of this event, Beloved disappears.  There are  a number of themes running through this novel, as well as slavery and its consequences for both black and white people America is shown at a time of change, just after the Civil war. Memory and how past memories are repressed for fear of what remembering might bring is another theme, as is the relationship between mother and daughters. 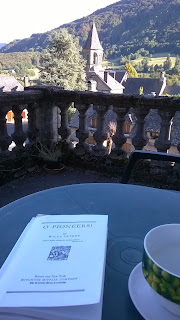 Yet another novel set in America, in the west as it was being opened up by pioneers is Willa Cather's "O Pioneers". I found this while browsing the local brocante fair in France and paid one euro for it.
Set in the underdeveloped prairie lands of Nebraska, this is the story of Alexandra Bergson, who is sixteen at the beginning  of the  tale, and her family. Her father, a Swede who left his native land for a new life in America, is dying and leaves the farm to Alexandra, realising that she has the intelligence and ability to make it successful. Her two younger brothers each inherit shares in the land, while the youngest Emil is set to go to university and study law. The descriptions of family life on the farms, the social lives of those who have chosen to make their lives in this hard land are drawn from Willa Cather's childhood in Nebraska. There was a mix of immigrants from many European countries, all searching for a better life for themselves and their families, along with the Native Americans, original inhabitants of the prairies. Alexandra is friendly with another Nordic family, the Linstrums and their son Carl. However the Linstrums leave Nebraska during a prolonged drought. Sixteen years later, Carl returns, meanwhile Emil has fallen in love with Marie, who they have known since childhood and who is now married to Frank. this affair is ended brutally. Despite being written over 100 years ago, the descriptions of human behaviour show that we haven't changed very much. I have read the last in this trilogy, My Antonia, but have yet to catch up with the second.
Posted by jaycee at 20:01 No comments: