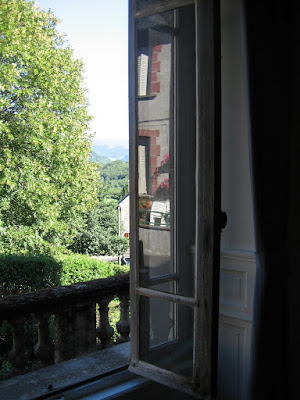 Writing this on the last day of August, the wind outside was definitely cooler, despite the sunshine and cloudless blue sky. Summer is beginning to slip away. The moon last night was a harvest moon, low and huge and golden on rising. Reading on the sunny balcony not so pleasurable in today's cool and gustybreeze.
I enjoyed Katie Fforde's Love Letters, the story of Laura, a shy but intelligent bookshop assistant who gets inveigled into helping organsie a literary festival. Laura also has to encourage a writer, Dermot , who has been suffering from writer's block since his success some years earlier, to attend the festival as the star of the show. The plot centres on Laura's feelings and emotions while trying to accomplish this task. I love Katie Fforde's books and this one had for me the added delight of revealing, sort of, how a literary festival might be organised.
Ive also read a couple of mystery/thrillers, one set in modern Sicily, the other set in medieval Glastonbury. Andrea Camilleri's August Heat has Inspector Montalbano as both the discoverer of the body of a murdered girl and the man who has to solve the crime. The heat of aSicilian August is well described and the plot, which starts with disappearance of a young child and the discovery of a hidden building, is different. Montalbano's habit of going for a swim in the sea to clear his mind and cool off as well i found endearing. This is one of a fairly long series of books, so I will look out for others, as this was a good read.
Arian Franklin's Relics of the Dead takes the reader back to medival Glastonbury and the discovery of a collection of bones in a churchyard. Are these the bones of King Arthur and Queen Guinevere? King Henry the Second urgently wants to knowand sends Adelia Aguilar, a Sicilian-trained female doctor and anatomist, and her Muslim companion to investigate. I love medival mysteries, combining historical fiction and crime as they do, so found this one hugely enjoyable, despite some of the nastier sides of medieval life being revealed. I'll look out for others in this series, which is called Mistress of the art of Death.
I first heard Esther Woolfson's Corvus being read on BBC Radio 4 Book of the Week some time ago, so was delighted to find a copy and read the whole story of Chicken, the baby rook she rescued and kept for many years. Her writing is beautiful, with wonderful descriptions of the life of wild birds as well as Chicken's life in captivity. Bird behaviour is described in detail, as well as some of the reasons for it. I read and re-read the description of the author's visit to see a raven's nest in the Highlands of Scotland with fascination, having seen and heard ravens in Wales earlier this year. Her collection of birds and how they were acquired is fascinating in its variety. I began to appreciate her fascination with corvids, as she described their personalities and relationships, each one a complete and interesting individual.
Another work of non-fiction read recently was R A Scotti's The Lost Mona Lisa, the story of the theft of Leonardo da Vinci's famous painting from the Louvre in 1911. The tale reads like a mystery, which indeed it was at the time, as the police completely failed to track down the thief. This book also covers more than the actual theft, as we learn how it was painted, who the sitter might have been, how acquired by Francis the First of France, as well as the life of the painting and its movements through French Royal palaces. Now it is difficult to see, even though it has its own room in the Louvre, such is the number of people who crowd in there to catch a glimpse of this legendary picture.
Posted by jaycee at 12:03 No comments: 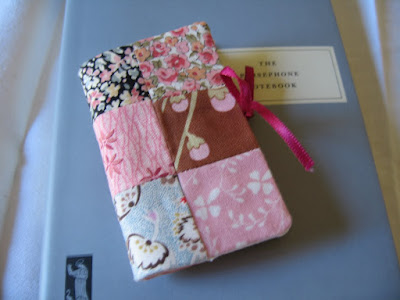 Being in need of a book for my needles, I found a very old 1 inch patchwork template that I've had for years, dug out some fabric pieces, some also having been around since the 70'sbut some are new, and after a little bit of sewing, I have a pretty little new needlebook for my sewing kit. Much better than the small piece of woolen fabric I was using before. I also included a tiny pocket for the needlethreaders which I now find essential from time to time.