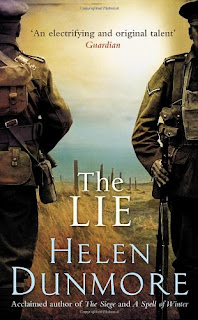 A lovely apparently gentle read, although the chapter headings giving instructions about the art of trench warfare in WW1 give the lie to that, as does the opening chapter, with its haunting of Daniel. I think you realise from the beginning that this will be an emotionally charged story.
Daniel Branwell and Frederick Dennis grow up together in a small Cornish town, although Daniel’s mother is a cleaning lady for the Dennis family, who live in a newly built substantial house. Mr Dennis’ wife had died in childbirth, leaving two young children, Frederick and Felicia.
Daniel is a clever boy, able to memorise what he reads and have constant recall, while Frederick is not interested in reading. The latter goes off to boarding school in Dorset, while Daniel has to leave school at the age of eleven and work as a garden boy at another large house two miles away.
There are many areas of contrast apart from the above such as the gentle landscape of Cornwall, the harshness of the weather at times, the life of the two boys, the lives of Felicia and her brother – she being denied much education despite being interested and clever.
The war when it comes both separates and brings Daniel and Frederick together; they are separated by the army, Daniel being a simple soldier while Frederick becomes an officer. Eventually Frederick leads Daniels troop but with disastrous results.
The main story is set in 1920, two years after the end of the war, but we don’t know what Daniel has been doing up till the time he arrives at Mary Pascoe’s cottage and seeks shelter. The ending is somewhat enigmatic – is he really being chased by so many people, or is he imagining it? He thinks he sees Frederick, but possibly that is his imagination and his being haunted by Frederick.
Daniel appears to be cynical at times, due to his experiences, both before the war, during it and afterwards, but is also sensitive.and is representative of how war affects people like him , Frederick seems to be more self-assured than Daniel, but comes from a more privileged background. Daniel seems to be his only playmate when young and he does not appear to make friends easily as an older child and young man. The question of whether Daniel and Frederick were sexually attracted to each hovers in the background e.g. the kiss between them in the garden in France, Daniel’s abstinence in France and his feelings towards Felicia are not clearly revealed.
I read this for a book club meeting but was unable to attend, so am curious to find out what others thought of it.