I watched the Newsnight programme the other evening which included a short article on the future of libraries. Supporting libraries was Tim Lott, while the government representative merely took the view that everything was on the Internet, and that "everyone has a computer now". He gave no facts or figures to back up this argument. The film of Alan Bennet speaking at a meeting to save Kensal Rise Library, in Brent was much more useful, concentrating on use of libraries by children as he did. The local public library is often one of the first places that children can go to on their own, as it is regarded as a safe place to be in. There children can find books to help with homework, use the Internet and also just begin to develop further as an individual being. Tamsin Greig's comments about the effects of closing a libarary in smaller communities was also spot on, which is why people in rural areas whose public libraries are under threat are fighting so hard to keep them open. The Public Libraries News website gives the current situation on possible closures, as well as links to other useful websites on the subject.
Posted by jaycee at 00:16 No comments:

Saw this meme on Random Jottings of A Book and Opera Lover, (and see right)so am following suit. 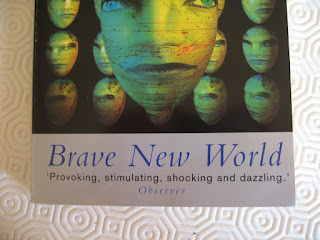 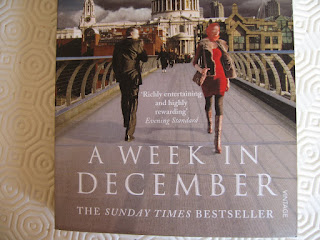 2.The book I've just read: A Week in December by Sebastian Faulks. Some of the financial wheeling and dealing left me a bit behind, but the story and characters kept me turning the pages, and the ending is superb. 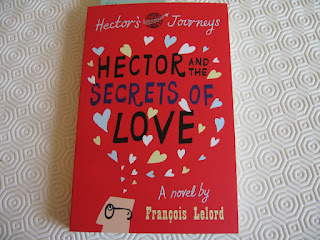 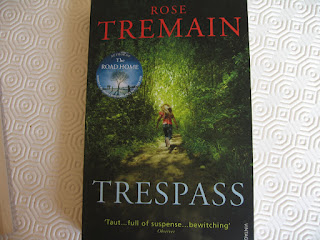 4. The last book I bought: Trespass by Rose Tremain. A book with a French setting, about complicated family relationships, together with incest, murder - a thrill of a read, with an amazing twist at the end. 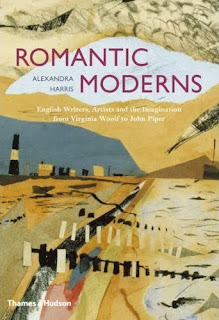 5. The last book I was given: Romantic Moderns:English Writers, Artists and the Imagination from Virginia Woolf to John Piper, by Alexandra Harris. I'm not given books very often, but this was a real treat. Not only a very interesting read, but a rather nice production as well.
Posted by jaycee at 20:35 No comments:

A balcony with a view

Have been catching up with a bit of reading recently, some of done on this balcony overlooking this view. 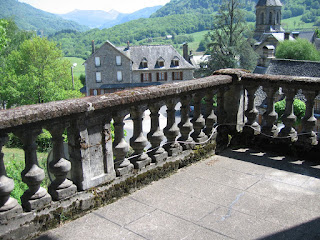 I started reading Sarah Dunant's Sacred Hearts before we left for France and finished it there. Set in the convent of Saint Catherine in Ferrara in 1597, the story concerns those women who were sent to convents in lieu of being marrried, as dowries for upper-class females had become so expensive that fathers could only afford to marry off one daughter. The main characters in this story are just such women, without a particular vocation but finding a home and a reasonably dignified life within the convent. When Serafina, daughter of a Milan merchant and a renowed singer, enters the convent she causes much upset with her reaction to her enclosure. Eventually Suora Zuana, the sister in charge of the dispensary, is asked to look after the new arrival. Zuana is the daughter of an apothecary and was encouraged by her father to study herbs and their healing properties and eventually earned herself a place in the dispensary. The story follows the convent's preparations for the season of Lent, including the Carnevale just before, and shows how Zuana and Serafina gradually become companions in the dispensary, as Serafina shows an aptitude for the work. Serafina appears to accept her place in the convent, but as the increasing revelry of carnevale outside is heard within the convent, so life within is increasingly disturbed as well. I really enjoyed this novel, being set in one of my favourite historical periods and places - Renaissance Italy, and have equally enjoyed Sarah Dunant's earlier novels set in the same place and period, The Birth of Venus and In the Company of the Courtesan.

Francesca Kay's novel An Equal Stillness , winner of the 2009 Orange Prize for New Writers, is the story of Yorkshire-born artist Jennet Mallow. Her parents were Lorna, born and raised in Jamaica and Richard a first World War survivor and vicar. Jennet showed her artistic leanings early, drawing on the blank wall behind her bed with a piece of burnt firewood; fortunately her mother then bought her coloured pencils and paper. Jennet goes to Oxford, then London, where she meets David Heaton, a promising artist. Marriage to David follows, and when life in a cramped London home proves difficult, the couple and their young son move to Spain, to a house with a glimpse of the sea. Here Jennet manages to find the time, inclination and will to paint for herself, and begins to taste the success which so far has been David's. Eventually the couple move back to London, Jennet finally managing to buy a neglected old house with a view of the Thames, and also to continue her rise to the heights of artistic success, with commissions and exhibitions over the years. David meanwhle returns to teaching and to success of a somewhat more muted kind as a portrait painter.
I found this book intriguing with its descriptions of places and paintings, but couldn't quite make up my mind as to how the paintings "looked". The main mystery is who is the narrator, as the book starts off from one point of view, but then switches to a different one. For a first novel, it is a very accomplished one.