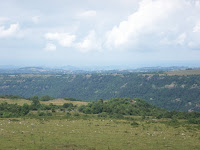 Yesterday we went on a bit of a hike. We set out from Le Vaulmier, walked through a footpath towards St Vincent-de-Salers, then followed a path uphill to the plateau above the valley . The path went through hazel woods for some of the way, mixed with other trees, so was pleasantly shady on what was a hot day. When we woke up in the morning, the sky was a clear cloudless blue, and remained that way all day and evening.
I must say that when we got higher up the path, past the waterfall which is signposted a couple of times ( and didn't have much water in it at this time of year) we met several obstructions, in the form of either metal or barbed wire fences strung across the way, which we had to crawl under a couple of times.There is also little if any signage for the path higher up, although it is marked on the blue series IGN map of the area. Much of the higher reaches of the path, indicated in a couple of places as part of a Grand Randonnee were quite overgrown with bramles and nettlesand other vegetation. It would seem that not many people use it to gain access to the plateau, or to descend from it. This is a great pity, as the path could well disappear completely in time if it is not used or maintained, and it is a really lovely way up past the mill at Orfaguet and higher. We eventually reached the plateau above the valley and were rewarded with gorgeous views , seemingly over half of the middle of France. Its almost like another world up there, as there is nothing between you and the endless sky; almost like flying. On one walk we did earlier this year, we saw an aeroplane flying along the valley below us. There are usually few if any other people, only the cows on their summer pastures, birds, and wild flowers for company, and of course no traffic noise, except possibly a passing 'plane. A fascinating place to get away from it all, but an hours walk downhill through a shady path brought us back to Le Vaulmier and the house.
Posted by jaycee at 17:27 No comments: 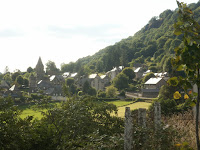 We've been back in Le Vaulmier for over a week now, having driven down on a baking hot day. The weather has remained very warm and sunny most of the time, except for one day last week when there was a storm followed by a day of rain, which helped fill up the waterfall we can see from the house. Although there is still quite a bit of work to be done to finish the house, we decided to leave things until we had had some holiday time, that being why we bought it in the first place. So we went swimming in Mauriac's open air pool, sometimes just lazed about the house and balcony, did a bit of tidying up in he garden, and went to some of the local events which help enliven the summer here. On Sunday there was a Marche du Pays, where everyone congregates and buys their supper from the various stalls which have been set up, selling grilled sausages, aligot, salads, crepes or gauffres, and of course something to drink, either a soft drink such as fruit juice - we had some delicious locally produced apple juice - or Auvergnate wine, also good. Its an opportunity for everyone in the commune to get together and chat over a meal, and is very pleasant.
I've been reading Charles Dickens Little Dorrit, a Book Club choice, and although I haven't read much Dickens, mainly ones for examinations ( that tends to be a bit off-putting, sometimes), I'm enjoying this just as a story to read, mainly for my own entertainment. At which Dickens is absolutely a master. So I've been enjoying it much more than I expected ( and I didn't watch the whole of the television series, only the occasional glimpse). I now appreciate why some people only take one book on holiday and make it a Charles Dickens or something equally long. However, I still couldn't do that, I need at least 3or 4 books a week if we're staying put somehwere, fewer if we go touring, as there is less time for reading then.
Posted by jaycee at 16:43 No comments:

South of the River 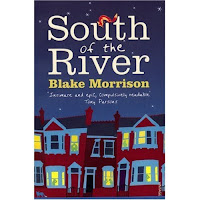 Blake Morrison's novel is set in Fulham, at the start of the New Labour government, but its not especially about politics as such.It did take me a while to get into this story - I started it last summer but put it aside after only a few pages. However when I picked it up again I persisted and finished it in a few days.For some reason, it took a little while to get used to the multi-voice narrative, as the story is told by several people,young, old, male and female, each giving their own point of view on sometimes the same event, but sometimes carrying the story forward. There is also more than one storyline, as each character has their own, while still being part of the others as well. Nat, a failed dramatist and part-time lecturer, married to Libby, a hard-working mother and advertising executive. Harry is a friend and former pupil of Nat's, as is Anthea, who is a bit of a lost soul, obsessed with foxes. Nat's Uncle Jack is similarly obsessed, although in his case the obsession takes the form of fox-hunting twice a week. Foxes in fact are a continuing theme in the novel, which includes the New Labour anti-fox hunting Bill. When I had finished this novel, I found it had been a satisfying read, with its mix of personalities, politics, journalism and life in south London.
Posted by jaycee at 15:35 No comments:

The Diving Bell and the Butterfly

For a supreme example of the power of both the human spirit and imagination , this short book would be hard to surpass. The author, Jean-Dominique Bauby suffered from Locked-In syndrome following a cerebro-vascular incident. He was unable to walk, talk or do anything except move his head slightly and blink his left eyelid. By this means he and his helpers devised a way of communicating, and he managed to write this book, even though it took a couple of minutes to describe one letter of the alphabet. The short chapters cover a very wide variety of subjects, ranging from his memories of work, his life with his wife and children, his girlfriend, and life in the hospital at Berck-sur-Mer, sometimes sad, sometimes funny but never self-pitying. Recommended to me by a fellow-reading group member, and I recommend it also. I haven't yet seen the film which has been made of this book, but apparently that is very sympathetique to the story.
Posted by jaycee at 21:45 No comments:

Rupert of the Rhine

I recently finished Charles Spencer's biography/history of Prince Rupert. A good read, well-written, seemingly well-researched ( I don't know enough about the English Civil War to criticise). It certainly threw a bit more light on this period of English history for me, but I don't yet feel impelled to follow up by reading further on the subject.Perhaps later. I did read a novel about Prince Rupert of the Rhine many years ago, written by Margaret Irwin, who wrote a number of historical novels, published in the 1920's to 1950's. She was highly regarded as a historical novelist at the time, and as far as I remember, her books were extremely well-researched. She also wrote a series of novels about Elizabeth I, covering her childhood as well as her rule as Queen, which apparently is due to be re-published this autumn in a single volume edition.
Posted by jaycee at 20:37 No comments: 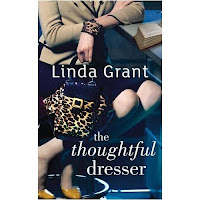 I've just finished reading Linda Grant's book The Thoughtful Dresser, a most interesting read,especially to anyone with the even the slightest interest in clothes and appearance. Don't we all want to look our best most of the time? I should have thought that most people think about they look at least once a day, and some of us much more frequently than that, without it being the be-all and end-all of our existence. Although I have never spent large amounts of money on clothes, shoes etc, I have always thought about how I present myself to the world - that is at the very least clean and tidy, and at most extremely well-groomed. As my mother used to say, soap is cheap, so there is no excuse for being dirty, and as for tidy, it doesn't take too much effort to make sure clothes are clean, ironed and mended when necessary. Most people seem to be able to manage this, and even in very poor parts of the world, people make an effort to keep themselves and their clothes clean, to indicate they still have their human diginity. I don't think appearance is all, but how we present ourselves to our fellow human beings is important, not just for them but for ourselves too. Looking at people in the supermarket, or wandering along the local high street, very few just seem to have thrown on the nearest thing; many have obviously given a bit of thought as to how they want their fellow beings to regard them. The majority of people in this country, men women and children, seem to give at least a modicum of thought to their appearance and although the result may not be fashionable, it is at least clean, tidy and reasonably presentable.

As for beige, that typical middle-aged women's colour, I never wear it, as it does abso;utely nothing for me - my sister told me so about a decade ago, when I mistakenly bought a beige jumper and cardigan. The jumper, too high a round neck, went to the charity shop and the cardigan I dyed jungle green and still wear from time to time, as its a nice lightweight merino wool and looks good with some brown jeans and a tee-shirt.
Posted by jaycee at 23:00 No comments:

A friend recently lent me a copy of D. J. Taylor's Kept, which is a mystery story set in Victorian times. The main mystery is how a young wife disappears and exactly how her husband met his death. The answer includes a major train robbery, a seemingly haunted house, a mysterious face at a window and much else besides, including some wonderful descriptions of life in Victorian London. I like D.J. Taylor's work very much, and enjoyed this novel, although there was a slight question mark about who the narrator actually is. Nevertheless, the suspense is well-maintained and although the point of view seems to switch from character to character with a sometimes confusing rate of change, the story continues on its way notwithstanding. The mystery side of the novel remains just that until near the end, and the title also raises the question as to just who it is who or what is kept. I look forward to what he will write next.
Posted by jaycee at 21:16 No comments: