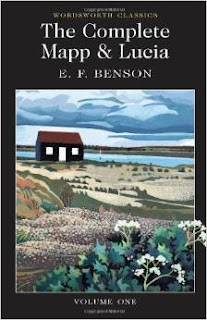 Some of my recent reads have been fairly lightweight, with E F Benson's Queen Lucia and Katie Fforde's Recipe for Love being the lightest of the bunch. I've come across so many comments about how wonderful the Mapp and Lucia books are that when I saw the Complete Mapp and Lucia stories in a two volume Wordsworth edition on the Bibliophile website/catalogue at a very low price that I immediately sent for them. I am reading them one at a time, not rushing through the whole sequence, so I can enjoy them at leisure. After all, they were originally published as independent novels, for entertainment. I also saw the television series broadcast at he end of last year on the BBC. I usually prefer to read the books first, then watch, so when I saw it I thought I'd better read the stories as well.

I have read many, but not all, of Katie Fforde's novels ever since she gave a talk about her writing many years ago at Southampton City Libraries, and enjoyed them all as lightweight and entertaining escapist stories, as was this title.
Tove Jansson's The Summer Book is a fairly short, easy to read story of one summer on a island in the Gulf of Finland, but has such beautiful writing, such tenderness in the description of the relationship between the grandmother and her granddaughter in their adventuring on the island that it will be one I remember for a long time.
Although Stella Rimington's At Risk and Susanna Gregory's An Unholy Alliance are thrillers, they are very different, At Risk being set in the present day, while An Unholy Alliance is set in 1348 at the time of the plague. At Risk is also the first in a series of thrillers with a heroine, Liz Carlyle at the centre of the action. I have n't yet read any of the more recent titles, but will look out for them.
I was unaware of just how prolific Susanna Gregory is, and will probably read others in her series of medieval mysteries, as they are well written and the events described so far in the past they are less disturbing than more up-to-date crime stories.

I picked up Rebecca Solnit's Wanderlust  in a local bookshop (October Books, a co-operative) as the sub-title, A History of Walking was intriguing.(It was also reduced in price).  How do you write a history of something that for centuries, millennia even, was the main method of getting about the world for all humankind.
This book covers a huge amount of not just history, but literature, art, human anatomy, gender politics,  mountaineering as well as where we walk in country or city and how the motor car is affecting our pedestrianism. Rebecca Solnit has included an amazing amount of research in this nicely produced volume.
Posted by jaycee at 00:30 No comments:

The Secret Lives of Dresses 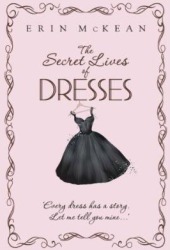 The Secret Lives of Dresses by Erin McKean seemed a bit twee as a book title when I saw it the library shelf but on looking at the notes/blurb on the back of the book and reading that the author also has a blog at wwwdressaday.com, , which I had read but not recently, I became more enthusiastic. The book turned out to be a competently written story about a young woman, Dora, brought up by her grandmother Mimi, who owns a vintage dress and clothing store in a small American town. Dora receives n urgent phone call while working in a student coffee bar as a fill-in summer job at university telling her Mimi has been taken to hospital, so Dora rushes back home.
While Mimi is in hospital, Dora decides to keep the store open, and discovers that Mimi had been writing a story about the dresses she sold.
I enjoyed the characters in the story and the visions created by the descriptions of the dresses and other items of clothing. although I am unlikely to wear vintage myself (probably an age thing- I'm in my late sixties) and I thought the gentle romance side of the story believable. I read this in one sitting, as although it's not a demanding read, yet it has great page-turning qualities. You do want to know what happens to the characters, will they be alright?
The discussion about clothes and how they can make you  and those who see you feel is interesting and always relevant. We are constantly given messages about appearance, that it matters, that people judge us by how we look and dress, although we are also judged on how we behave to those around us. I think this book caught my imagination as I used to make a lot of my own clothes, encouraged by my mother. Growing up as a teenager in the 60's, good quality clothes were expensive, so if my sister and I wanted something new to wear, we could make it, using a pattern and materiel bought locally. I have carried on making, although when I had a full-time job and two children, I made fewer clothes; I gave up making trousers for  the boys when they started needing a fly zip, but continued to make cushions and curtains for the house, and for our summer house in the Auvergne.
Posted by jaycee at 09:28 No comments:

Return to the Auvergne


Back in our house in the Auvergne, the other evening we went out for supper to  a new establisment in the village. It is L'Establou de la Vallee, and has been set up by the son of our neighbour. The family have been working hard at converting a barn on land they own just above the village itself, and have turned it into a lovely ferme auberge, in a beautiful setting, and with magnificent views over the whole vallee du Mars and the mountains surrounding it.  L'Establou is well worth a visit. The food is simple but generous and tasty, and the ambiance in the restaurant calm and peaceful. There is a lovely sitting out area beside a small lake.
The whole valley is very beautiful, and at the moment busy with hay making, in order to provide food for the cattle in winter. Cattle rearing is the major farming activity of the area, and cheese is a major product. Cantal cheese is found throughout France and is one of the country's oldest. Some of the local dishes , such as Aligot and truffade, use Tomme  fraiche de Cantal, which is very young cheese,, creamy in texture, somewhat similar to unsalted mozzarella. Both aligot and particularly truffade feature regularly on menus in local restaurents, both being mixtures of potatoes and cheese, but there the similarity ends. Aligot resembles mashed potato but requires a lot of beating to achieve its smooth texture, while truffade is prepared differently. I have to admit I have not yet made either for myself, just eaten dishes prepared in restaurants or at communal meals where aligot and sausage are often the menu.