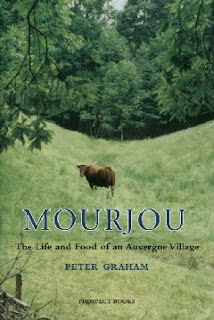 While away in France, I kept dipping into Mourjou: life and food in a village in the Auvergne, by Peter Graham, an Englishman who has spent most of his life in France. I found this through the Prospect Books website, a wonderful resource for anyone interested in food and its history. The village we have a house in is in the Auvergne, though further north than Mourjou, but much of the food is the same. The dish aligot is a regular at the evening fairs held in August, when all the villagers gather together to buy their supper and eat and chat at long tables set up outside the Mairie. The descriptions of past village life are fascinating and obviously the same for the villages in the region. However life has changed somewhat, as the author reports, and is more like life in the rest of France, as communications have improved a lot in the last century or so.
I picked out an old Katie Fforde book on a recent trip to the library, Living Dangerously. Published in 1995, it seemed to have passed me by, yet I'm a keen fan of Katie Fforde's writing. Her books are an easy read, and fall into the romantic category, but for me are ideal comfort reading in between something a bit more demanding. I usually borrow them rather than buy them however.
The more demanding read I read before this was Marcus Zusak's The Book Thief. It might seem strange to call a book written for young adults more demanding, but the setting of Germany in the Second World War, and the dreadful things that happen to the central character Liesel and to the family who foster her after her mother disappears and her younger brother dies on a train journey is an emotionally demanding read. The Book Club who chose and discussed this felt it was "I'm glad I've read this book" title, and it led onto various memories for one or two of the older members who'd lived through the same war in England, some as children and some as adults. Reading this made me feel much more compassionate towards those ordinary German people who didn't agree with Hitler, but had no means of expressing their disagreement outwardly - it was only expressed by hidden acts of resistance, like fostering the daughter of a communist, and hiding a Jew in their basement. Although I describe this as a more demanding read, the writing is beautifully simple and clear, it is the emotions aroused that are more complex and demanding.
Posted by jaycee at 22:49 No comments: 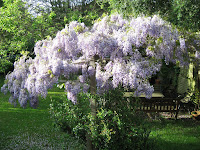 The view from my kitchen window includes this beautiful wisteria, which flowers reliably every year, except one year a long time ago when we had a very severe frost in April just as the buds were just starting to develop. The scent is quite powerful too, as I walk underneath it, and the leaves when developed provide shade for the table and benches underneath.

I've just finished reading Celia Lyttleton's "The Scent Trail" in which the author describes her journeys to many different countries in search of the raw ingredients for her own personal scent. She travels to Grasse, in the south of France, in search of mimosa, to Florence for irises, to Turkey for roses, to Morocco for oranges and neroli, to India, Sri Lanka, to Yemen and finally Socotra in search of ambergris. She tells us a lot about te history of scent and how it was and is used in some of these places, and we also learn about how the scent is extracted from the individual flowers, how these flowers have to be picked at certain times of day for the best perfumes. I love scent and would love to have a personal one as Celia Lyttleton has done, but usually wear my favourite Yves St Laurent "Rive Gauche". Celia Lyttleton's writing is enthusiastic about perfume and lyrical about the scents and places she visits. An intriguing read for anyone who loves perfume.
Another recent read was Alexander McCall Smith's eighth title in his No 1 Ladies detective series, The Good Husband of Zebra Drive. The setting is familiar to those who have read others in the series. Although violence and death are mentioned, they are not dwelt on as in some crime novels. In fact I sometomes wonder if these are actually crime novels; they seem to be more philosphical musings on human behaviour in all its variety. Nevertheless,despite the deceptively simple writing I find them an enjoyable comfort read.
Posted by jaycee at 19:14 No comments:

Although I haven't blogged much recently about my reading, I'm still there with a book in my hand or on my bedside table, although if I have any serious reading to be done, bed is not my ideal place for it. However it's a rare night when I don't pick up a book and read for about quarter of an hour or so before falling asleep.
Reading while in France included Nicola Beauman's "A very great profession", which is a very readable study of popular women's novels and their authors writing between the two world wars. Nicola Beauman has written the survey under several main themes, as to the subjects covered by the novels she describes so well. Persephone books, which was founded by Nicola Beauman, publishes many of these novels, some of which are familiar to me from my early years in the library profession as the authors were still popular during the late 1960's and early 70's. The books are not only a pleasure to read, but are also well produced, on thick cream paper with an elegant type-face, nicely bound with distinctive grey covers.
Julian Barnes' book Flaubert's Parrot was another read while in France, quite appropriately. I've had this on my bookshelves for ages and finally decided it was time to read it. The story is of a retired professor who becomes obsessed with finding which of the various stuffed parrots he comes across while researching Flaubert's life is the original. During the hunt, we learn a lot about Flaubert, the man and the writer, and his life, loves, relationships, habits, and writing. It is very funny in parts, both from quotes from Flaubert and the narrator. How much is actually true about Flaubert I'm not sure, not having read a biography of him. Good fun, though and worth waiting for.
I took The Suspicions of Mr Whicher, by Kate Summerscale to France with me and found it an interesting read. A complicated and true story about the murder of a young child, the youngest son of the father's second marriage. The setting is Road Hill House, which still exists, although now has another name. The family living in the house at the time of the murder, which took place in the Victorian period, were middle class, the detective eventually called from the Metropolitan police force was a working class man. Kate Summerscale gives us a lot of historiacl detail but manges to keep up the suspense and a desire to find out who dunnit. I found this a satisfying read.
Posted by jaycee at 16:20 No comments: