I've just started reading Irene Nemirovsky's Suite Francaise for a book club meeting - on Friday. But it is already grabbing my attention, so unlike a recent meeting in which only one person had actually finished the book we were discussing, one hadn't even started it, and the rest were at different parts through it, I think we'll all have read it. I must admit that I hadn't realised that she had written so much before the Second World War, so will try and seek some of them out. My other read of the moment is Jane Brocket's The Gentle Art of Domesticity, which I came across when I discovered her yarnstorm blog, which I have found very enjoyable. The photography is really inspiring in both book and blog, and has prompted me to keep my little digital camera to hand. Jane is so inspired by colour herself and she expresses that feeling really well. Although I'm not a knitter or crocheter, I do sew and make cakes from time to time, and have done all my adult life, especially when I had two teenage sons at home. I've always sewn clothes , curtains , cushion covers , bedspreads and so on for myself and for the boys when they were small. I must admit I got a bored when a lot of the sewing seemed to be patching the knees and hems of school and other trousers, just so the child was in a fit state to leave the house!
Posted by jaycee at 16:30 No comments:

I've recently finished reading Andrew Motion's memoir In the Blood, which I found very absorbing. He managed to get the reader into his world very successfully, although I thought that world to be a slightly melancholic one, probably because the story starts with the accident which his mother suffered, and the implications of it were then a sort of shadow in the background of the rest of the narrative. As a contrast to that I've also just read Zadie Smith's On Beauty, which I've been looking out for at the library for a while - I didn't want to read it enough to buy it or even reserve it - sometimes it's nice to leave things to chance. The first book read by the reading group I set up at Shirley Library was White Teeth, which some of the group found hard going and one or two thoroughly enjoyed. I found On Beauty rather different from White Teeth, as the cast of characters is not quite as eccentric but still fairly international and the relationships not quite as complex, which makes for a slightly easier but still enjoyable read. The relationship between the two families, both men academics with non-academic wives who become friends of a sort, and their children, most of them at college or having just left or about to go is portrayed is all its argumentative detail and is all the more enjoyable for that, it's what gives the book life and humour. The ending is also one of hope for the future, not what it appeared to be turning out to be.
Posted by jaycee at 16:35 No comments:

Labels: In the blood, On beauty 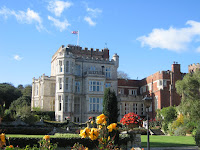 Earlier this week my sister, husband and self spent a night on Brownsea Island, in Brownsea Castle. We travelled over from Poole Harbour and walked up through the garden to the Castle, had lunch then walked the length of the island. The weather had dried out a bit following the rainy morning, and we saw lots of wildlife, some really tame ducks and peacocks and wonderful views. The next day was absolutely glorious, with warm sunshine, clear blue skies, and beautiful autumn colours on the trees. The formal gardens at the Castle were still looking good, more end of summer than actual autumn, and the walk we took after breakfast took us a different route to the other end of the island ( it's only about a mile or so long) by way of the cliff tops and seashore on the south side, facing the Purbeck hills. The peace and quiet were really soul restoring - it must have been like this in more parts of the country before the blessed infernal combustion engine powered its way into our lives and consciousnesses. The north side of the , facing Poole harbour is noticeably noisier. After lunch and another little wander through the gardens near the Castle, we caught the launch back to Poole and so on home.
Posted by jaycee at 14:24 No comments: 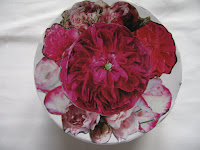 We had a "bring a recycled item" event at church recently - I took some papier roule earrings I had made, in a box papered with a magazine picture. The earrings were made with magazine picture paper too and were very successful, so now I'm making some for the Christmas Fair, to be held at the beginning of December. Other types of recycling include remaking an old sundress into a summer skirt - it's made out of a rather nice cotton black and white print, and was just the thing to wear this summer with a black top too a summer funeral.
Posted by jaycee at 11:51 No comments:

Are male cooks taking over?

As an avid lifelong reader and collector of cookery and other books about food, I've recently noticed that there seem to be more books , recipe, cookery, call it what you will, by men than women, with the possible exception of Nigella Lawson and her latest offering, Express. The titles I've been buying, reading and sometimes cooking from have all been by men, and include Nicholas Clee's Don't sweat the aubergine and his blog - he wrote about oxtail stew a couple of days after I'd just made a huge one at home, with meat from my local butcher, Upton's of Bassett in Southampton, who also make delicious pies and pasties. Nigel Slater 's Real fast food is another recent buy - I gave the free copy I acquired when I bought a magazine to my son- which has some good recipes and ideas, even though it was first published in 1993. It would now seem to have become one of those kitchen classics, which one returns to again and again. Hugh Fearnley-Whittingstall is another food writer with strong opinions on lots of different aspects of food. His recent collection of journalism "Hugh fearlessly eats it all" is an interesting gathering of articles covering a wide variety of food issues and makes me think that bit harder about what I'm eating. A recent visit to one of the three local branches of Waterstones bookshops showed that the faces on display in the Cooking section were mostly male. A few years ago it was probably more female than male -but there are probably now more professional chefs publishing books and appearing on television. This seems to be a re-run of the early days of cooking on TV, when those appearing on TV were mostly male , for example Graham Kerr, Philip Harben, although not forgetting the terrifying Fanny and Johnnie Craddock
Posted by jaycee at 17:06 No comments: