Sitting in a Book Club members garden this morning, discussing Sebastian Barry's The Secret Scripture was a lovely experience - civilisation at its best. Lovely coffee, homemade cakes and biscuits and intelligent talk, in warm early autumn sunshine - what a beautiful way to pass an hour or so. The book we had all read won the Costa prize last year and after reading it, was obviously a worthwhile winner. We all had enjoyed reading the story of Roseanne Clear, although we all had differing reactions to it. Most of us loved Sebastian Barry's wonderful use of language, and read out many extracts and favourite lines and although several of us thought the ending was somewhat contrived, we hadn't seen it coming, at least on a first reading - some of the club had read it more than once, and found clues on the second reading.
Posted by jaycee at 20:52 No comments: 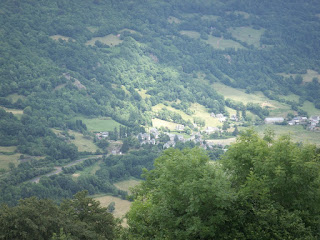 So its farewell to France for another few weeks, until sometime in October when we'll return for a few weeks work and then shut the house up for the winter. We took a couple of days to return, driving up to Normandy one day, staying overnight in a comfortable small hotel in Conches-en-Ouches, with a delicious dinner. Next day we drove north of Le Havre and wandered round the small town of St Romain-en -Colbosc, quiet and pretty, then after a quick lunch in a bar/brasserie, went down to Le Havre and had a walk along the beach front, despite the not very nice weather.
In the last few days before leaving France, I managed to read A L Kennedy's Day, a story of a young man taking part in a war movie, who remembers the grim reality of life as a tail gunner in a Lancaster bomber in the war itself, but also remembers fallimg in love for the first time, and the friendship of his fellow aircrew. The novel is told almost completely from Day's point of view, almost as a stream of consciousness, which makes you feel that you really know how this young man thinks and feels. Although at times a painful read, still a wonderful book.
Posted by jaycee at 16:26 No comments:

Still here in France, in the beautiful vallee du Mars, the weather which when we first arrived in August was very hot and sunny is now a bit cooler, though there is still plenty of warm sunshine, lovely for a swim in Mauriac's outdoor pool, which closes on the 13th of September. The leaves on the trees are just beginning to take on autumn tints. A local friend said she went hunting for girolles (a type of mushroom) the other day, but found none worth collecting, only the odd tiny ones, and they were difficult to spot being the same colour as the fallen leaves from the hazelnut trees in the woods.
Finally finished Little Dorrit, what a wondrful read. I'm now a Dickens fan, having avoided his writing in the past(probably due to mental laziness). The stories within the story are beautifully told and add to the wonderful texture of the book.
Much painting of walls and some woodwork has been done, although there is still lots to do, the house is beginning to become more homely. It would seem that since it was built in about 1920, not much redecoration has been done, most of the stuff we are doing is decorating over the original, much-deteriorated decorations.
What with painting and swimming, not that much time for reading, but I have recently finished Tim Winton's Breath, a story set in a small Australian country town, not too far from the sea. Bruce Pike or Pikelet, befriends the son of the towns pub owner, and both set off to the sea, to learn to surf. They both become hooked and attract the attention of Sandy, an older surfer who takes them under his wing. The addiction all three have to surf and surfing is beautifully described, as is young Pikelet's growing up and friendship with Sandy's young wife Eva. The emotions of a young boy coming to terms with his ability in the surf, his changing relationship with his parents, school and his eventual growing up are tenderly written. A wonderful story, I recommend it.
Posted by jaycee at 10:25 No comments: