Things my mother did tell me

I recently bought Lucia van der Post's "Things I wish my mother had told me". I found this quite interesting, but at the same time ultimately disappointing. It's full of useful advice about fashion, beauty how to live elegantly, and finishes with a short chapter on good manners. I think it's all a bit too serious for me, somehow, or maybe I'm too old for it - and I'm usually a sucker for any kind of self-help books of this type. I've enjoyed Lucia's columns in The Times newspaper, too, on which a lot of the information in this book is based. But somehow my initial enthusiasm waned as I read, or skimmed in places, through the book. I'm not really that interested in which designer handbag to buy any more, wouldn't spend the money on one anyway.

Things my mother did tell me were about her life as a nurse in the Queen Alexandra's Royal Army Nursing Corps Reserve during World War II, and her growing up on a farm in New Zealand before the war - as well as all the usual stuff about how to behave as a young lady.Dovegreyreaderscribbles describes two books about the QAs on her blog, so I'll be looking out for them


Much more up my street is Wild Swimming by Daniel Start, a beautifully illustrated catalogue of places one can swim in rivers and lakes in Britain and also a lyrical plea for people to take to the fresh water in the open, instead of indoors in the chlorinated blue stuff of the local sports centre. I'd say as well as, as its not realistic for most town-dwellers to go open water swimming that easily. Most of my wild swimming has been done in the sea off the Isle of Wight and in the Mediterranean, but I've also swum in rivers in France and as a child in the Ladies pond on Hampstead Heath. It's true that fresh water, and sea water for that matter, feels very different to chlorinated swimming pool water. When in my school swimming team , we used to practise in a sea-water pool, but competed against other schools in a pool with chlorinated water , and we all felt we swam more slowly in the latter. But the writing and descriptions of the places to swim are very tempting.
Posted by jaycee at 23:07 No comments:

Patrick Gale's Notes from an Exhibition , lent me by a friend who comes from Cornwall, was a riveting read. Rachel, an artist and mother of several children, dies in her studio, leaving her Quaker husband and her children to sort the remains of her life and also to discover her beginnings in another country and continent. The novels themes of love and loss kept me reading, as did the theme of a mothers love for each of her children, all different characters. The theme of loss in many guises, is a strong one, but some losses may lead to a gain of another sort. The background is also strongly written and adds to the atmosphere. I'll be searching out other books by this writer soon, as this is the first I've read by him. (The pictures in the paperback I read look a lot better on the screen, if you follow the link given in the book.)
Hester's Story by Adele Geras is not particularly new, but I've ony recently come across the adult novels by Adele, and have enjoyed the couple I've read so far. They are reliable reads, in that they have some believable characters, the plots are also realistic and the endings are properly happy. Good middlebrow stuff, quite romantic but not too sugary.
Khaled Hosseini's second novel, A Thousand Splendid Suns is a quite different story. Mariam is the illegitimate daughter of an Afghani business man, brought up by her epileptic mother until the age of fifteen, when she is married off to Rasheed, a shoemaker in distant Kabul. The novel covers the Soviet occupation of Afghanistan, and their departure, the complicated politics and the rise of the Taliban. After a rocket attack kills her parents, Laila, a neighbours' child of fourteen is taken in by Rasheed and Mariam. After Laila recovers from her injuries, Rasheed marries her. The novel then tells of the relationship between the two women and how it develops. I found this book almost unputdownable, as I wanted to find out what happened next. As this is a Book Club read, I'll be very interested in how the other members feel about it. I haven't decided if it is better or just as good as his first novel, the Kite runner.
Posted by jaycee at 18:56 No comments:

I've been posting this blog for just over a year now, and manged 40 posts so far. That's less than one a week, but I never intended it to be a daily post, only possibly a weekly one. I think I started it more for my own amusement rather than anything more serious, just to see if I could write something that more or less satisfied me and posibly anyone else who might read it. I'm not sure that I've reached the standard I was aiming for, as I never feel completely satisfied with what I've written, no matter how long I spend on re-reading and re-writing it. However, that's normal for me and probably a lot of other bloggers, but one just has to get something up there on the screen and move on. It's also more about reading than I possibly originally intended, but reading fiction and what is known in my former profession as narrative non-fiction ( biography, travel and anything else that catches my interest- design, crafts, art, politics occasionally). I find that I cannot just read fiction, but need an irregular dose of reality, in the form of some well written comment on some aspect of life- it leavens the daily dose of snippets of information from the other media, newspapers, radio and television.
Posted by jaycee at 20:58 No comments: 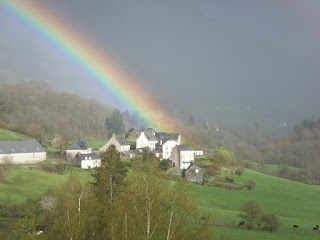 Recently returned from France, where time was spent scrubbing floors and putting in kitchen drawers and cupboard doors, so not too much got read. Also had ahuge variety of weather, including storms as well as rainbows. However I did manage to finish Richard Mabey's Nature Cure, a gentle ramble through his account of a major depresion and how re-engaging with nature in a totally different part of the country to that he had inhabited for most of his life, and a thought provoking read, especially as I read it at Le Vaulmier, set in a valley lush with woods, pastures and streams cascading down the hillsides and out of roadside walls whenever any rain falls, which it does often.

I also read, in more-or less one sitting, Susan Hill's The Pure in Heart while away, and a that was another satisfying read. I'm getting into and enjoying this series, with Simon Serrailller and his complicated family relationships

Anne Enright's The Gathering was a different read, a miserable tale from one point of view, but also a memorably lyrical look at loss, both of a brother and companion and a childhood and how its memories may be recalled. The Book Club members made similar comments when we discussed this at our regular meeting; some felt they regarded it more highly after they had read it, rather than enjoying the actual reading of it.
Posted by jaycee at 15:38 No comments: