Andrea Levy's The Long Song (interview here) was a return to the tropics for me, where I spent my early child.hood, although on the other side of the Atlantic Ocean from the setting of this story. The descriptions of the heat of the Caribbean, the red earth and the lushness of the vegetation all made me recall memories from long ago. However this book is not primarily about the tropics as such, it is a story of people, and two main characters at that, July and Caroline. July is in fact the narrator of the story, with an introduction and encouragement by her son Thomas and the story opens with differing accounts of her birth. Our Book Club discussed this recently and opinions were very mixed. We all loved the sheer quality of Andre Levy's writing, but for several members of the group, the horrors of slavery and its effects on both slaves and their owners were difficult themes to read about. Having read Andrea Levy's reasons for writing this book here, I found the descriptions of the daily life on the plantation both moving and at times amusing  - the use of a stained bedsheet as tablecloth when entertaining a group of important neighbours, for instance. July's having to give up both her children, for different reasons, was shatteringly sad, but she nevertheless went on to make a life for herself. A wonderful, if at times emotional, read.
Posted by jaycee at 21:00 No comments: 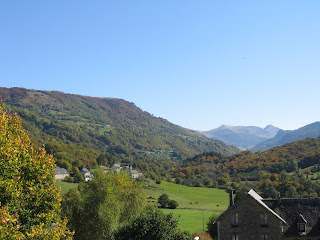 Here in the Auvergne, we have had very varied weather the last week, plenty of sunshine, but also a really vicious storm with very large hailstones on the last day of August, and which brought down mudslides and rockslides, some of them affecting the road. There have also been days when the temperature is well into the upper 20's Centigrade, but despite the heat, there are some signs of the coming autumn, mostly in the subtle changes of colour on the wooded valley sides. Life is calmer now that many of the visitors have returned home, there are fewer out-of-department numberplates on the cars dashing up and down the local roads, and the supermarketsnow shut at midday for their hour and a half or two hour lunchbreak, except on Friday and Saturday. One day last week we drove over to Murat, a pleasant town situated on the side of a hill overlooking the valley of the Alagnon river. The old part has lots of little winding narrow roads, many pedestrianised. there is lots of information (in French)
here and some in English here and here, After a good wander round and a restorative cup of coffee, we headed off to St Flour, visited in one of the stages in the Tour de France in July this year. The upper town with its cathedral and museums, is situated on a small plateau, with a lower town down below by the river. Its an interesting place to wander round, and has many small cafes and restaurents. The view from the ramparts at the east end of the cathedral over the valley below and distant mountains is stunning.
However, despite visits and other doings, such as swimming,general pottering and so on, I have manged to fit in some reading.