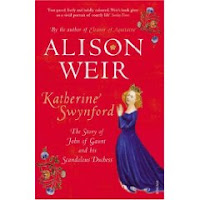 I've just finished reading Alison Weir's biography of Katherine Swynford: the story of John of Gaunt and his scandalous Duchess. A lovely absorbing read, about a medieval woman of repute. Like many people, including the author herself, I first came across Katherine Swynford in Anya Seton's novel Katherine, which I read as a teenager, and still have an ancient yellowing copy on my bookshelves, complete with bodice-ripper type cover. I haven't read it for ages, but did read and re-read it several times in the past. Alison Weir's book goes back to the original medieval sources, but despite their lack of mention of Katherine at times, nevertheless there is enough material to build a convincing picture of an woman, who despite being of relatively humble birth, managed to become one of the most important women in the history of the monarchy in Britain, and from whom other world leaders are descended. Katherine was fortunate enough to mix among people who encouraged women to be educated, interested in literature, music and also be able to manage an estate, as she had to when her husband Sir Hugh Swynford was away fighting with his overlord, John of Gaunt in France. I really enjoyed this read, as it put the flesh on to the bare bones of the story that I remember, and made Katherine come alive again.
Posted by jaycee at 14:52 No comments:

I recently borrowed, read and returned to my local library forthwith Camilla Morton's A year in High Heels. I had quite enjoyed her "How to Walk in High Heels", but the more recent title was not so informative, nor so useful. There was the occasional intersting snippet, but much of it was either stuff I've knoen about forever, or else stuff I've never felt the need to know.

However another random read was R C Sherriff's "The Fortnight in September" first published in 1931 and republished by Persephone Books. This was a delightful read, The Stevens family have booked their seaside boarding house accomodation in March, and now the day before their holiday has arrived. The story tells of their organising their departure, packing, setting off on the train to Bognor, and their happiness at being away for a whole fortnight. Their pleasures are simple ones - being on the beach and having a family game of cricket, going for a walk over the dons or along the shore, meeting a new friend and going out for an evening stroll, listening to the band playing. The story is written in simple language but nevertheless complex emotions and feelings are described, for although life for the Stevens family seems at first to be straightforward, different members have differing feelings and ambitions. The eldest son, Dick works out how to work towards an ambition he has to becoming an architect; the father enjoys the feeling of absolute freedom his solitary walks on the downs give him, away from all the cares of work; the mother enjoys her evenings on her own, sewing, which she never seems to have time for at home. Although the story ends on the last day of their holiday, the life of this family lives on in the imagination, as it would have done in real life. One part I particularly enjoyed was the journey to Bognor from Clapham Junction. Having recently undertaken this very same route by train, by inadvertently taking the wrong train at Clapham Junction, I could recall the stations and views R C Sherriff describes very clearly, which certainly brought the tale to life for me. I first came across R C Sherriff through reading his play "The Long Sunset", about the Roman abandonment of Britain in the 5th century AD, which although I haven't looked at since leaving school, still seems to be in my memory as a powerful piece of writing.
Posted by jaycee at 20:31 No comments: 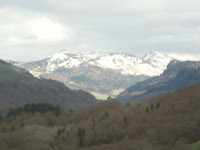 Glorious day here in the Vallee du Mars in the Auvergne region of France, following a pleasant one yesterday, when we walked down the valley to the next village, St Vincent de Salers, then back again through the woods the other side; however this entailed a very preciptious up- and down footpath, which kept disappearing under last years leaves . We made it back home in time for supper. The snows on the Puy Mary and Puy de Tortue at the top of the valley are beginning to melt with more and more darker patches of ground appearing. We seem to be lucky with the weather at this time of year, as it was sunny and warm last year too. The road and pathsides are full of wild flowers; cowslips, wood anemones, violets, wild hellebores, pulmonaria are some of the ones I can recognise and name , and there are others that I can't. More and more are coming out each day as the weather warms up and the days get longer. Last week the weather was misty and a bit gloomy, with some rain on Thursday and Friday.
We have been here for over a week now and are feeling more settled in. The house is responding to being occupied, as it is getting warmer inside, after being left cold for several months during the winter. Fortunately all the hard work we did last year in the garden has paid off, as it still looks fairly tidy, only the grass is just beginning to grow a bit, and the few shrubs we left are in bloom.
Posted by jaycee at 16:14 No comments: