Our Book Club recently discussed Tracy Chevalier's latest novel, Remarkable Creatures. The story of Mary Anning and her discovery of the first complete ichthyosaurus, and her friendship with Elizabeth Philpott, a spinster dumped in Lyme Regis together with her two sisters, make a very readable story. Tracy Chevalier's research is good, although obviously this is fiction, so facts are altered for effect on the story. Nevertheless, she brings to life two women from different classes, makes their friendship very real, and also highlights the real difficulties Mary Anning had throughout her life with money and recognition for her work in finding and preserving fossils. We pretty much all enjoyed the story, several of the group know the area very well, so their interest was was more intense. Most of us had read several of Tracy Chevalier's other novels, but some felt this latest title was not quite of the same standard. Personally, I feel that her writing and storytelling is up to the expected standard, although even if the actual plot was fairly slight, she has made an interesting tale out of it.
I've recently finished George Sand's Winter in Majorca, the story of some months she, together with her lover Chopin and her children spent in that island in 1838 and early 1839. The translation I read was by Robert Graves and also has notes by him. Her writing is captivating, especially when describing the beauty of the scenery, but her attitude to the inhabitants was at the least offhand, if not actually rude on occasion. They in turn were scandalised by her relationship with Chopin, and also very concerned about his illness. I recently watched a television series in France about George Sand's life, which brought out how eccentric she was, but also how hard a worker she was to maintain a home for her children, as she brought them up on her own after separating from her husband.
A different read was Helen Garner's The Spare Room. The story of a visit by Nicola to stay in Helen's spare room, while undergoing some alternative treatments for her almost terminal cancer at a clinic in Melbourne. Helen is at first eager and willing to help Nicola in any way she can, but as Nicola's treatments take their toll, so Helen's emotions change and the reader is made aware of the dificulty Helen has in controlling her feelings while Nicola maintains an almost frightening optimism. A beautiful piece of writing , describing raw and painful emotions on the subject of a forthcoming death.
Posted by jaycee at 21:09 No comments: 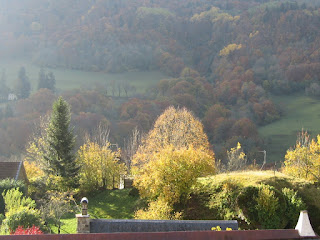 Back from France, after a cross country drive through some beautiful countryside, and an overnight stop in the small town of Brou. The hotel we spent the night at , the Plat d'Etain, was very comfortable, with pretty bedrooms and dining room and excellent food. It's mentioned in the Routard guide, which used to be published in English, but no longer, but is still available in France. It's a useful guide, as it lists hotels in places not always mentioned in the Michelin guide. The hotel was easy to find, being on the main town square. Petrol was easier to find, as the blockages of the refineries ceased over a week ago. However, there was a protest meeting in Le Havre as we were heading for the ferry.
Posted by jaycee at 22:13 No comments: 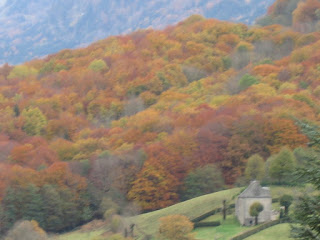 We haven't had a lot of sunshine recently here in the Auvergne, although the temperature is a bit milder than when we arrived a couple of weeks ago. Although the days are a bit dull and cloudy, the trees fillng the valley are in glorious autumn colours, mostly golds, yellows and russet with occasional brighter red. They seem to be more spectacular this year than last.
Posted by jaycee at 15:37 No comments: