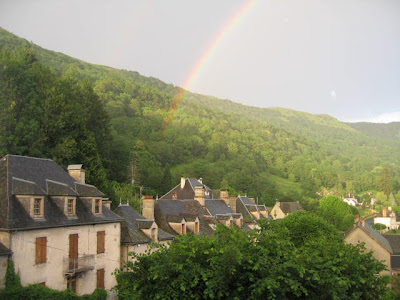 The Cantal in summer is lovely and green, despite the heat. In July and early August temperatures were in the 30's (C) , but the day before we arrived a couple of weeks ago, there was a severe storm, with extremely heavy rain, which filled up streams, rivers and waterfalls. The time we've been here has been mostly hot  and sunny, with a bit of coolness in the early mornings and late evenings, and we have spent our days mostly cycling (my OH) or swimming in the nearest open-air pool (me) or walking (both of us). We have had a day out on a coach trip to the river Lot, which included a very civilised lunch on a boat meandering slowly down the river and back again, with local French people, attended the village Kermesse, visited a local vide-grenier ( like a car-boot sale) Some of the time I have spent sitting on the balcony, reading, especially in the afternoon when the sun has moved round and there is some shade.
I read Alexander McCall Smith's Trains and Lovers: The Hearts Journey very quickly, as it's a fairly light read. Four people on a railway journey all tell their own very  different stories about how love came into their lives.
I regret to say I abandoned Elanor Dymott's Every Contact Leaves a Trace for another read, as it seemed to be rather slow-paced and I did not feel very sympathetic towards the narrator. The writing lyrical, but I couldn't work up any feelings for the characters.
Jeanette Winterson's The Daylight Gate is a retelling of the story of the Lancashire witches, and is published by Hammer, some of whose horror films I've watched in the distant past. I've also read Harrison Ainsworth's novel The Lancashire Witches, published originally in 1848 and still in print, probably because witches and similar tales of the supernatural seem to have an everlasting appeal to human nature. I enjoyed Jeannette Winterson's version of the tale: her writing is strong with very vivid descriptions of the place and characters are also very clearly drawn. It would definitely make a walk on Pendle Hill in Lancashire a very chilling experience, even on a sunny day.
Posted by jaycee at 14:16 No comments:

The Unlikely Pilgrimage of Harold Fry by Rachel Joyce was a seemingly gentle read at the start, but as Harold progresses on his pilgrimage to visit his former colleague Queenie, dying of cancer at the opposite end of the country from Harold's home, his mood, and that of the book, becomes more complex. Harold initially sets out to simply post a letter in reply to one from Queenie, but then decides to keep walking. He tells various people he meets about his idea of walking the length of the country to see Queenie, and eventually his story is picked up by a journalist, and Harold becomes household news. Other people join Harold on his walk, although none knew Queenie. Meanwhile, Harold's wife Maureen is coping with Harold's absence from home in her own way. The story of their relationship is at the heart of the book and at the conclusion their relationship has changed utterly. Although Rachel Joyce uses fairly simple, straightforward language to tell Harold's story, and the journey itself is a basic plot, yet this is not quite the simple tale which it first appears to be. Well worth reading.
Posted by jaycee at 21:27 No comments:

About this time of year, many newspapers and magazines publish list of books to read while on holiday. Some mention classics, some include recently published rather heavyweight non-fiction, most include fairly lightweight fiction. Many assume that the holiday is flying off somewhere, lying on a beach for a couple of weeks, perhaps doing a little bit of exploring in the local area, and doing a fair bit of drinking and dining out. But holidays and people who take them are much more varied than that, and may include hiking or rambling in a variety of European mountainous areas, deep-sea diving, sailing, paragliding off a mountain somewhere and other adventurous pursuits. Or possibly staying in a rented house or gite, in the middle of some quiet countryside, with or without a pool. Or even cruising, if that's what grabs you (not me, I suffer from sea-sickness).
I think that the type of holiday will surely influence to some degree what you take to read, even if it's all loaded on to an e-reader. If you're doing a lot of activity during the day, and going out in the evening, finding the time to concentrate on a more demanding read may be difficult, so something shorter and lighter may be easier to pick up and put down, while staying put in one place may make the choice of something more demanding just the job. What every constant reader probably wants is a choice of reading matter, to suit their mood and the circumstances they find themselves in, and now that is much easier to organise on an e-reader than taking a pile of books, despite my own preference for the book as a physical object.
Posted by jaycee at 13:32 No comments: