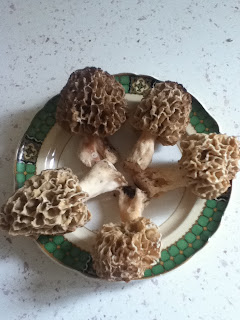 The other day , our neighbour gave us a handful of fresh morel mushrooms, picked on his land. We had them as a starter for supper, fried with a little butter and garlic. I've seen these dried in jars in local shops and supermarkets at fairly expensive prices, so these fresh ones were a real treat.
Posted by jaycee at 16:19 2 comments: 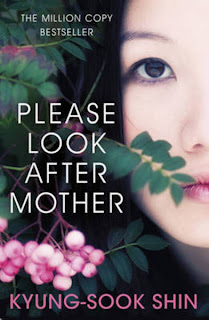 Kyung-Sook Shin's novel Please Look After Mother was a thought-provoking read. The story about an elderly woman who goes missing in Seoul station, not following her husband onto a train, is told in several different voices. The eldest daughter, a writer, starts the story, and we hear from a son, the woman's husband and finally the mother herself. The children and father each reveal different aspects of the mother (we never know her name) and how she lived a life of self-sacrifice for her family. The mother's own voice tells us more, including how she, an illeterate woman, managed to have her daughter's books read to her, so she could understand what her daughter had written.One unusual feature of the writing is the use of the second person singular by several of the narrators, which I felt made for a more personal iand immediate nvolvement in the story The discussion we had at the Reading Group about this book was quite wide -ranging, and we all agreed that we were glad to have read it.. We read it a couple of weeks ago, when North Korea was posturing about war and so on, so it was also a timely read.. 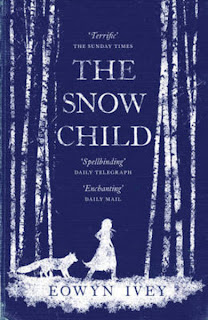 Eowyn Ivey's The Snow Child, set in Al;aska in the 1920's was a lovely read, and a very accomplished debut novel. The story of Jack and Mabel, who have become homesteaders in Alaska. Jack comes from a family of farmers, Mabel's father was a  university professor. Jack works hard to set up the farm, while mabel works indoors to provide food, clean clothes and so on. Neither of them are very young and find the hard life quite arduous. One winter, following the first snowfall, they build a snow maiden, putting a red scarf and red mittens on her. The next day, she has melted somewhat, but the miitens and scarf are gone, later glimpsed on someone running away through the woods. Mabel and Jack are befriended by a local family, who have three sons, one of whom comes to help Jack work his land. The descriptions of life in the wilds of Alaska are beautifully  well as Jack and Mabel's are thoughtfully brought out. A joy to read, and a complete contrast to Kyung-Sook Shin's novel.
Posted by jaycee at 15:51 No comments: