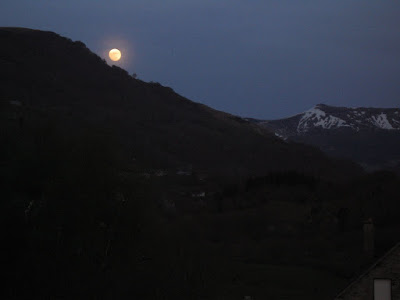 The moon yesterday evening was absolutely beautiful as it appeared behind the mountains at the top of the Vallee du Mars, here in the Auvergne. The weather since we arrived last Saturday has been warm, sunny and dry, so helping us open up our house after what was a cold winter. Still lots of work to do, but the small garden only needed the grass cutting to look presentable.
Posted by jaycee at 14:26 No comments: 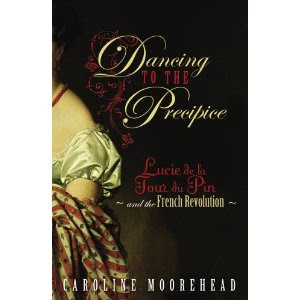 I've been reading Caroline Moorhead's biography of Lucie de la Tour du Pin, Dancing to the Precipice. Beautifully written and based on Lucie's own diaries, this book gave me much more detail about life in France among the aristocracy during the French Revolution and the rise of Napoleon Bonaparte than I had expected. I did study the period as part of my Open University degree, but that was rather a long time ago now and I've doubtless forgotten much, so this biography was a useful reminder of a period of great change in the history of France. It is also the tale of a formidably resourceful woman who dedicated herself to making sure her family survived the Revolution, escaping to America from hiding in Bordeaux after obtaining the help of Therese Tallien, wife of Jean Tallien, who had brought the terror of the Revolution from Paris.
The details of Lucie's life are recounted precisely, although sometimes the detail of the larger events Lucie lived through are less clear. I found the sadness of Lucie losing four of the five children that survived infancy, only one son outliving her, almost unbearable; yet Lucie herself seemed almost stoical in her attitude to these deaths.
This not a perfect book, as it seems to be a mix of biography and history, but is still an interesting read.
Posted by jaycee at 16:13 No comments: 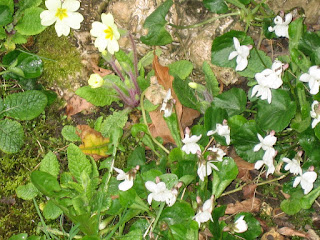 Now that spring has well and truly sprung, my garden is filled with tiny violets, some purple and some white, and primroses, all of which are self-seeded, and which were carefully avoided when the lawn was cut the other day.
Posted by jaycee at 15:07 No comments:

The trouble with a book that everyone in a book group likes is that it doesn't generate much discussion. That was the situation that we found ourselves in last Friday when we met to talk about Geraldine Brooks "The People of the Book". The story of the Sarajevo Haggadah, a Jewish book of prayer, The People of the Book tells the story of the books existence through glimpses of the lives of those who may have produced it and others who may have rescued it from destruction on a variety of occasions, although these are obviously fictionalised. We don't really know the origins of the people who have handled the book through the ages. The story begins with Hanna Heath conserving the book, an illustrated manuscript dating from the 1480s, under the eyes of UN security, in Sarajevo, after its rescue under shellfire during the Bosnian war by the Muslim librarian. The way the story of the book works backwards through history, by means of the various tiny fragments that Hanna finds aroused our curiosity, and we also found Hanna's own story, set in the present, took the impetus of the novel forward. I found the story fascinating, and it made me consider the "lives" of some of the old books in my possession (none as old as the Haggadah, although some date from the end of the 17th century) but some have signatures ut of previous owners, bits of paper stuck in or just inserted, pencilled comments and the like.
Posted by jaycee at 22:51 No comments: 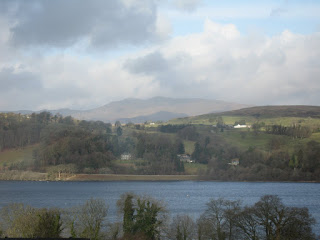 The view from my hotel room overlooking Lake Bala


Just before Easter, I went to Wales to spend a few days near Bala, actually at an hotel which overlooks Lake Bala and has views to the mountains beyond, weather permitting. We were very fortunate, as out of the three full days we were there, the two days we spent walking were both dry for most of the day, especially when we were eating our lunch halfway up a welsh mountain. In my experience, there's nothing more uncomfortable than having to eat a picnic lunch in the wilds in the pouring rain - no shelter, nowhere to sit, and even the sandwiches get wet. The second walk we took gave us a wonderful views towards Snowdonia and perfect weather for walking up a welsh mountain, not too hot, sunny enough to be able to see a good distance and NO RAIN. The food at the place we stayed at was extremely good, better than quite a few French places I've eaten in, so all in all, a very pleasant few days break. We did have one day when the rain was a bit more troublesome, so we did a drive towards Portmadoc, visiting Portmeirion on the way and passing through Harlech with its wonderfully sited castle, ending up at Barmoth and fish and chips for lunch - delicious. We really didn't need the beautifully braised ox-cheek on offer for dinner at the hotel that evening, although that was tasty as well.
Posted by jaycee at 21:00 No comments:

As I don't seem to have been doing much blogging about what I've read recently, here's a little catch-up. Most of my recent readings were chosen from quick visits to one of my local libraries (surveys have shown that the average time for a reader to visit a public library and choose one or more books is just under ten minutes) I picked up Sandra Howard's Ursula's Story, a follow-on to Glass Houses, which was her first novel. This later book tells the aftermath of Ursula's marriage break-up and divorce from her newspaper-editor husband, and also how Ursula gradually copes with life on her own, and sets about building a new and different life for herself and her two daughters. Ursula has begun a relationship with Julian an antiquarian bookseller and writer, and Ursula's younger daughter works in his bookshop on Saturday mornings. Later, both daughter and lover go missing at the same time, causing a family crisis. There is a lot of emetion in this book and I felt everything was seen through Ursula's eyes, but with little reagard for her daughters or others feelings. A bit tedious in places, although the plot does make you keep turning the pages.
Helen Dunmore always provides a thought provoking read, and I found House of Orphans no exception. Set in Finland in the very early years of the twentieth century, this is the story of Eeva and how her life develops from early years with her politically active parents in Helsinki, a period in an orphange outside the city after her father's death; Thomas, a doctor who regulalrly visits the orphanage takes her into his house as a servant. He is recently widowed after an unhappy marriage and his servants left on the death of his wife. Eventually Thomas realizes that Eeva needs to return to the city and helps her to do that. Eeva finds a flat to share and meets Laurie again, a friend of her childhood. Laurie is sharing a flat with Sacha, who is involved in a plot to assassinate the Russian governor, Finland being a Grand Duchy within the Russian Empire. The plot is exciting, and there are also some beautiful lyrical passages, for instance Thomas in his sauna and Thomas watching Eeva after her sauna; Laurie and Eeva's growing adult relationship and the flat that Eeva shares with Magda, a journalist.
Another couple of recent reads were two of Alexander McCall Smith's Sunday Philosophy Club series, featuring Isobel Dalhousie who gently solves a problem or two while often thinking deeply about other matters, such as her young son Charlie and her relationship with Jamie his father and Isobel's lover. I enjoy these stories for their gentle pace, their philosophising and their attitude that life is on the whole good, despite the fact that bad things can and do happen sometimes. The Careful Use of Compliments and The Lost Art of Gratitude are the two most recent books in this series, which I think I prefer to the Mma Ramotswe stories.
Posted by jaycee at 21:05 No comments: