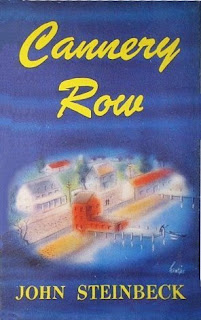 I seem to have read quite a few books recently, but not commented on them. One read was Cannery Row, by John Steinbeck. Set in California, cannery row was a real place based on sardine fisheries and canning factories. However, the characters in the novel are fictional, although probably a mix of people that Steinbeck had known. Doc, the owner of a small laboratory supplying sea creatures to other laboratories and academic departments for study, is one of the few people with a regular job. Another is Lee Chong, owner of a store selling almost anything and everything. Other characters are Mack and the boys, a group of vagrant types who work from time to time in the canning factories and who take over an old store of Lee's and turn it into a home from themselves. Ther are some wonderful set pieces of comedy in the story, such as the party which mac and the boys plan for Doc when he returns from a gathering trip, but Doc is late and the party happens without him. Another wonderful event is a frog-gathering expedition by Mack and the boys; the frog collecting is successful, but the money it was intended to raise is less easy to keep a hold on.
The effect of the novel is partly comedic, but as the period in which it is set is the Depression of the Twenties and Thirties, partly heroic in the way in which people get on with their lives.

Emily Bronte's only novel, Wuthering Heights is a totally different type of book to Cannery Row. Set in Yorkshir, with vivid descriptions of the wild landscapes and winter weather, as well as the houses inhabited by the characters, the story is based on the lives of Catherine Earnshaw and Heathcliff, the foundling child brought home by Catherine's father and adopted into the family. Cathy and Heathcliff eventually form an amazing passion for each other, which is never requited. Catherine marries Edgar Linton, the son of a neighbouring landowner, while Heathcliff disappears for a time, returning to Wuthering Heights with all the appearance of a gentleman. Heathcliff's distress at Cathy's marriage leads him to revenge on his former adopted family, with severe consequences for Cathy and her brother Hindley.  The story is told by two narrators, Lockwood, who rents neighbouring Thrushcross Grange from Heathcliff, and Ellen (Nelly) Dean, a servant who has worked for both the Earnshaw and Linton families.  This was a re-read for me, as i first read and studied it many years . This time it seemed more of the entertainment as which it was initially published. The power of this story lie in the depictions of the characters and their emotions.

Another very different read, Rosy Thornton's The Tapestry of Love is set in the modern day Cevennes, a wild, very rural and beautiful part of the Massif Central, bordering the Languedoc region. The heroine, (another Catherine) a divorcee with grown-up children, decides to leave England and settle in France, and start a business as a seamstress and upholsterer.  Her nearest neighbour, a rather enigmatic Frenchman is the main love interest, but there are several trials and tribulations that Catherine undergoes before he declares his feelings and she hers. The wild and beautiful landscape is clearly described, as is the sudden changeability of the mountain weather. Catherine's family, her children and sister all visit her in her rural hideaway, with varying impact on her new life. A worthwhile read.

The Other Family by Joanna Trollope is one that escaped my attention until I chanced on it in my local library. The story of Chrissie and her three daughters, Tamsin, Dilly and Amy. Her partner, Richie, a singer and musician dies suddenly, and Chrissie and her daughters find that their once secure life falls apart. Richie had had another family, a wife whom he never divorced and a son, now grown up, both still living in Newcastle, Richie's home town. All are affected by Richie's death in a variety of ways, and it is how Joanna Trollope interweaves the stories of Richie's two families and how they come to interact with each other that makes for an intriguing read.
Posted by jaycee at 17:37 No comments: