A good turn and life as a wife

Kate Atkinson's One Good Turn is a book I've only just caught up with and thoroughly enjoyed. A thriller cum mystery without too much overt violence, a character we have met before in Jackson Brodie and some lovely little twists and turns in the plot make this a really good read. The atmosphere of Edinburgh at Festival time is well done without overemphasis. The other characters are well drawn, especially Gloria, Julia and Louise Morgan - all seemed real enough people to me, and would recommend this read to anyone, but especially to those who read nothing but thrillers or murder stories. This is definitely on a higher plane than most of those. Must hastily order her next one , When Will There Be Good News, from my local library - I try not to buy too much fiction as the house is full enough of books already and I'm not now a great re-reader.

One writer I am tempted to re-read from time to time is Elisabeth Luard, especially her biographical-with-recipes books. I've not long finished her story of My Life as A Wife, :Love, Liquor and what to do about the Othet Women , a sort-of follow on to her book Family Life, although it is mainly concerned with how she came to marry Nicholas Luard, founder of Private Eye and the adventures that marriage led her through. I found that some of this book recalled instances in my own life, such as my mother's comment " I'm off to join your father ", who was working as a mining engineer in Ghana, almost as soon as I received my A-level results - the sort of that's life, now jolly well get on with it attitude.


However Elisabeth's life was very exciting to this outsider - working at Private Eye, even as secretary, marrying the boss, going to live in Spain with four young children, then France for a year just to ensure that the children spoke fluent French as well as fluent Spanish, and finally returning to Britain - all this sounds very dashing, and doubtless very hard work too. It also gives a view of life and attitudes in the '60's that seem much more care-free about how children are brought up than today .
Posted by jaycee at 13:09 No comments: 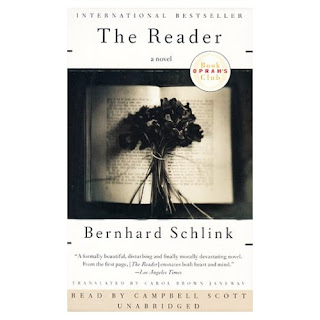 Some books I've just finished took me to Africa ,India and Germany.

Bernard Schlink's The Reader ( now a film, which I've not yet seen) is something that escaped me when first published. Although set in Germany after World War II, this story of a young boy and his relationship with an older women describes how they first meet, how their affair develops and then ends, almost abruptly. However while a student, the boy sees his former lover again, in court being tried for crimes committed as a concentration camp guard. In both parts the boy reads to her, which she loves. Although this is a fairly short book, the depth of emotions described make it one of the most satisfying reads I've had in a while. The issue of illiteracy is one of the most important of all, as without literacy, so much of life is inaccesible, and can be lost, forgotten and abandoned.
I visited Africa courtesy of Chinua Achebe's classic story Things Fall Apart, which is almost a classic novel of the colonisation of Africa. Set in Nigeria in late Victorian times, the story describes the life of an African village, self-sufficient and stable with its own organisation, religion and explanations of events that affect people. The main character Okunkwo is regarded , and regards himself, as a strong, successful man, maintaining three wives and their children, but despite his apparent success, his life eventually ends tragically. Some of the events which bring this about Okunkwo had some control over , but others, such as the arrival of white missionaries in his village during a period of his absence, Okunkwo had no control over, and this lack altered his image of himself. There is an acute sense of loss of the past, which while it may not have been perfect, was nevertheless understood by the village society. I'm really glad to have read this at last.
Rohinton Mistry's A Fine Balance took me to India in my imagination. Life in a village, and life in the slums and suburbs of a large city are beautifully described, the story flowing along with almost unstoppable impetus. The series of terrible events that happen to Ishvar and his newphew Omprakash throughout their lives are documented almost clinically, and the lives of the other two main characters, Dina and Maneck are also descibed in detail from childhood on. The discussion at the Book Club considered the meaning of the title, and concluded it showed how difficult that balance was to both achieve and maintain.